This one is entitled “I’ve No Idea What I Was Thinking – It Just Happened Like This”.

When you see the creation, you’ll understand.

If I’m honest, I can’t even tell you if there was a theme or an inspiration as I don’t remember when I started this one (it started out as something else entirely). 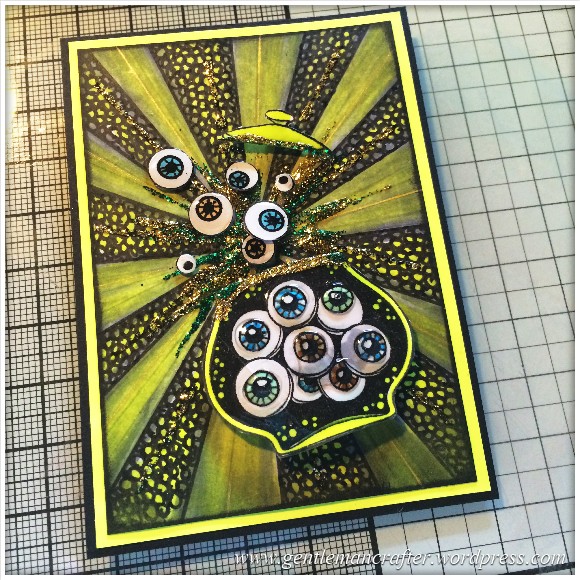 After all, who else would do an artist trading card showing a jar full of eyeballs exploding all over the place?

Anyway, if you haven’t clicked away because this is just too weird then you may be interested in how it was created.

The background was originally to be a zentangle doodle project. I had drawn a range of intersecting lines and was going to create different patterns in each wedge however I got carried away with the little circles. Having abandoned it as the “real” project it sat around my desk for a while.

Whilst sitting there a few days later I was looking through my Spectrum Noir pens and wondering what I would use the fluorescent set for and then as if by chance I spotted the castaway piece of card. So I thought, it’s not wasteful as it was just laying around waiting to be thrown away (I hadn’t had a tidy yet). So I smeared the fluorescent yellow pen all over the card.

I thought that this looked a little like a chemical explosion but I still wasn’t thinking that this was going to be anything.

It was only much later that I was having a browse of my Inkadinkado stamps that I came across a set that I had forgotten about. It had jars with brains and eyeballs in. A light bulb came on with a “ping”!

I stamped out the jar with archival ink, coloured it with the same pen and then glazed the eyes with Diamond Glaze. As it dried I created some more eyeballs.

When all was dry I chopped of the lid and cut out the spare eyes. I then stuck the jar on the ATC with some Pinflair Glue Gel

I then chucked on a load of glitter glue, adding to the explosion look and finally stuck the spare eyes on, to make them look as if they were bursting from the jar. 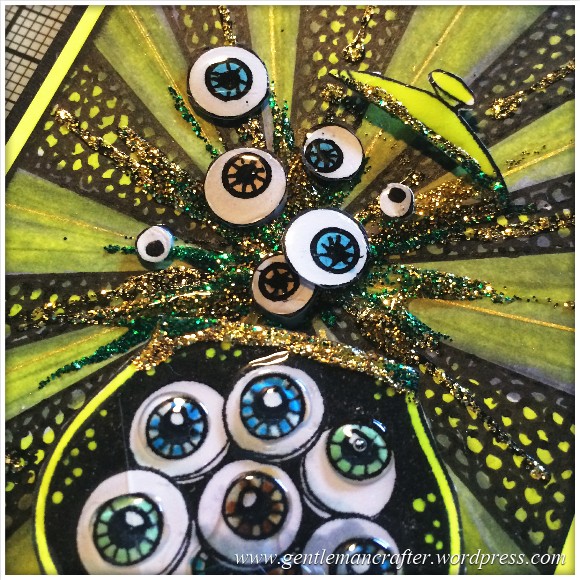 Wow! What a zinger! And all from what would have been rubbish. See – DON’T TIDY UP YOUR CRAFT ROOM!

Anyway, that’s it for another ATC.

Thank you for visiting. If you have any questions or comments about this post, please feel free to pop them in the comments section below.