As you know I tend to try and keep abreast of all things Scan N Cut so I have been eager to find out more about the Scan N Cut DX which launches in the US next week.

Whilst I still haven’t got my hands on the new machine, nor been able to pin down a launch date for other areas of the world, I have been able to do a bit of research into what’s new and compile a list of information and resources that may be of interest to those that are waiting to see what’s new. 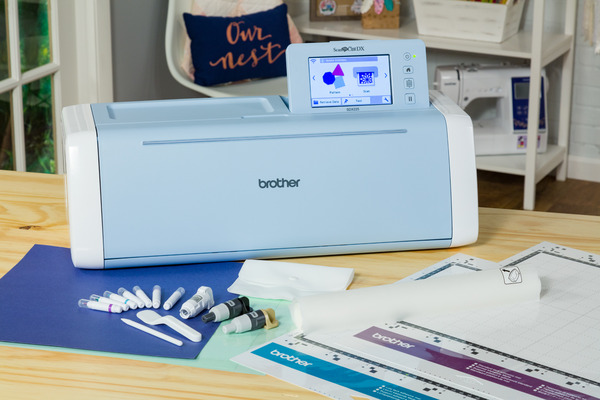 Quite different from previous models. New blades and new mats too.

Now, as far as I can see there is a range of fundamental differences between this new DX model and the existing CM and DC models. I will try and share as much as I know.

Some of these new features really do make sense to me, some not so much. This post isn’t intended to support or deride the machine though, instead, it is intended to share my initial thoughts and give you the information with which to make your own.

It does assume that you already have a Scan N Cut as I am only listing the new features and talking about the upcoming model. If you would like to know more about the current versions, I would suggest you check out the Brother Scan N Cut website, or the Create and Craft TV website.

One more thing to note, this machine has been launched alongside a new all singing all dancing embroidery machine. This, therefore, explains a number of things regarding its full name, including the Innovis tag. I won’t go into all of that here though as it’s mostly irrelevant branding stuff.

Ok, onto the new features of the new model(s).

This model is MUCH bigger than all previous models.

Here is a side by side comparison screenshot from Julie Fei Fan Balzer’s video {link at the end of this blog post}. The machine at the bottom is the CM900. The new machine is both wider and deeper.

Whilst many of the screens will seem familiar, a lot of the icons, and some of the processes have had a little makeover. Can’t imagine it will stump a new user as it will all be new, however, existing users that intend to change their machine out for this new one might have to have a little look around to find things that they previously went to automatically.

As some of you will have seen with the recent update, you will now be able to send files for cutting directly from Canvas Workspace desktop version to your machine via a USB cable.

Probably the most anticipated new feature and biggest change to the Scan N Cut experience is the Blade Sensor Technology with Auto Blade which is reported to detect the height (thickness) of the material placed on a ScanNCut DX compatible mat. Apparently, this removes the need for the user to fiddle about with depth settings. It does however still need a test cut to find the right pressure. I have also read that there is also a setting to select half cut – or kiss cut – for cutting the top layer of vinyl and not the backing.

Again, as a result of the new Auto Blade, the new machine also cuts materials up to 3mm in thickness, rather than the previous 2mm. Note however that when this is referenced it refers to craft foam and felt. No mention of denser materials like plastics or wood.

From various videos, I also note that it cuts thicker materials by cutting in incremental stages. So basically it cuts 1mm in one pass. 2mm thick and it will cut the outline twice and finally if the material is 3mm thick it will perform 3 cuts. It is, therefore, cutting in stages in order to be able to get through that material.

It appears that we will be able to save as Cut, Draw, Foil or Emboss data with this new machine.

Not entirely sure what the difference is beyond cut/draw as we have been able to use cut/draw patterns to foil and emboss however I am sure there must be a reason … ?

I hear that the new DX machine cuts quicker and quieter than previous models. This for me wasn’t an issue, unless I had ten going all at once in a workshop, lol.

The ScanNCut DX machine has 2 interchangeable positions for the built-in scanner. Position 1 is used when scanning thin materials, such as photographs, for a better quality scan. Position 2 is used to scan thicker materials such as 3mm foam and for typical cutting and drawing.

The ScanNCut DX machine has storage for blades, touch pen, and other tools right inside a little section of the redesigned front cover which can also act as a work surface, unlike the CM models.

I see that there is also a pull-out platform at the back to help support the mat as it comes out of the back of the machine. It doesn’t look huge in the picture so am unsure how effective it will be but perhaps that, in conjunction with the new front platform, will keep the mat flatter for longer. 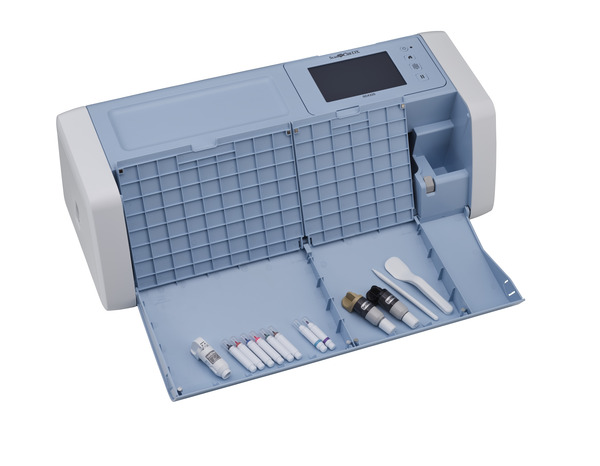 We’ve seen the scanning feature since day 1 of the Scan N Cut, however, there have been two changes made to the new DX model.

First, the scan to USB quality has been upgraded from 300DPI to 600DPI, giving clearer results on scanned documents.

The second is that there is a two position scanning bed mentioned above.

Whilst a lot of the original designs are included, a range of new appliqué patterns and 3-D paper patterns have been included. Check out the pattern list link later in this post to see the designs.

Most videos that I have watched declare 1300 built-in designs. I believe that this relates to the DX225 model whereas the DX125 has 600+ designs.

As I have previously explained before, it is impossible for a single line font to exist and so these are actually provided as individual patterns that you will have to load one by one. This is how the applique letters work in existing models.

While I’m talking about fonts, there are some new styles included in the new machine.

These, I guess, will have been included for those that simply don’t want to use Canvas Workspace which allows you to use any true type font.

After choking on my brew I actually thought, ‘if this keeps the price of the machine down because we can use Canvas Workspace instead, then great, do it.’

For those of us that like to use the machine as a stand-alone machine, however, what price will this feature be?

I have tried to find out more about this but at the time of publishing this post, have been unable to get an answer. It does, however, look like there will be different models of the machine and perhaps this feature is not included on the entry-level one…?

My hope is that it was a typo on their website.

The Scan to Cut Data feature has been given a makeover by adding a smooth line feature which will give cleaner cuts, I read.

I am aware that if you put ragged edge designs in they will result in low-quality scans however I have not really had an issue because I tend to clean up what I am scanning first. Perhaps other folks’ experiences weren’t the same as mine…?

Not clear if this feature will be added to existing models of the machine.

Oddly not a much-advertised feature, but one that is incredibly relevant if using this machine in conjunction with your Brother embroidery machine because the Scan N Cut DX can create cutting files based on PES or PHC file formats.

The two features included allow users to transfer an existing embroidery design into the machine via a USB stick and then either automatically create cutting data for an applique piece or convert embroidery data to cutting/drawing data, right in the machine.

Not clear if this feature will be added to existing models of the machine.

Ok, so, for some reason, Brother decided to redesign the cutting mats. This time around they can only be fed in one direction however they now have a hanging hole at the other end.

These new mats can only be used in the new machines.

The CM900 had a 4.8″ LCD touchscreen. The new DX machines have a 5″ touchscreen. Not a huge leap, but hey, every little helps.

A new roll feeder option has been added. This means that, if you work with a lot of vinyl, you will now be able to use rolls of vinyl and cut much longer designs. Plus, this can be used along with the Universal Pen Holder for drawing longer personalized banners. This attachment includes a guide rail with a trimmer blade to ensure straight cuts of rolled material for smooth feeding and alignment.

This optional accessory will NOT be available to use with CM or DC models, according to several sources. 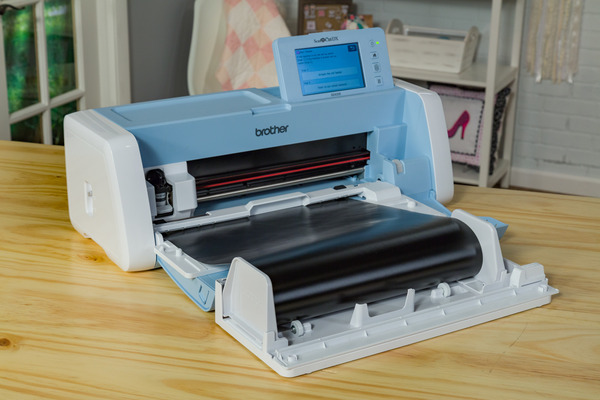 Let’s take a look at some videos that summarize these new features.

First a rather zealous and dramatic promo from Brother.

Next, Julie Fei Fan Balzer – Scan N Cut Ambassador in the US, gives an overview…

Here’s a final one showing a Brother rep demonstrating this at what looks like a trade event.

I have not yet seen a confirmed price for release in the US. The model being released next week via HSN is the DX125, no word on the DX225 that I could find.

Pricing in Australia has been set at around the $799 figure – that is around £450 figure for the SDX1200, which I assume is the Ozzy equivalent of the DX225. An unconfirmed release month of October has been rumoured.

Whilst there have been some very useful adaptations made I can’t help but think that some were not really needed. That’s just a grumpy old man’s personal opinion though and not based on anything other than my aching knees.

Do I need a new Scan N Cut machine? No.

Will I get it? Probably. I am going to wait until I have a little more information before diving in though.

If, like me, you would like to do some more reading about this new model, please do feel free to check out some of the links below see for yourself.

* Note, this list of documents relates to the SDX225 model of this new machine and is sourced from the USA section of Brother’s support website. It is unclear if there will be any differences to models that will be released in other areas of the world at this time.

Many thanks for stopping by and I hope that you found this post useful in some way shape or form.

See you again next time.

33 thoughts on “A New Scan N Cut Experience Is Coming”