I recently treated myself to something a little ‘different’ as I continue to explore new home decor ideas – for when I finish the decorating which still isn’t done.

So, instead of finishing the decorating I decided to have a little play time.

Oh, haven’t told you what I got. I treated myself to a tub of Viva Decor Concrete For Kneading.

Now, I had a quick look around the internet for instructions, and of course checked the tub.

Basically, don’t lob it around as it can irritate the lungs and mix according to the chart on the tub. Fine, can do.

I grabbed a plastic jug from the kitchen, that I won’t be using for food prep anymore, and mixed up a small batch and draped it over a cling film wrapped mug. 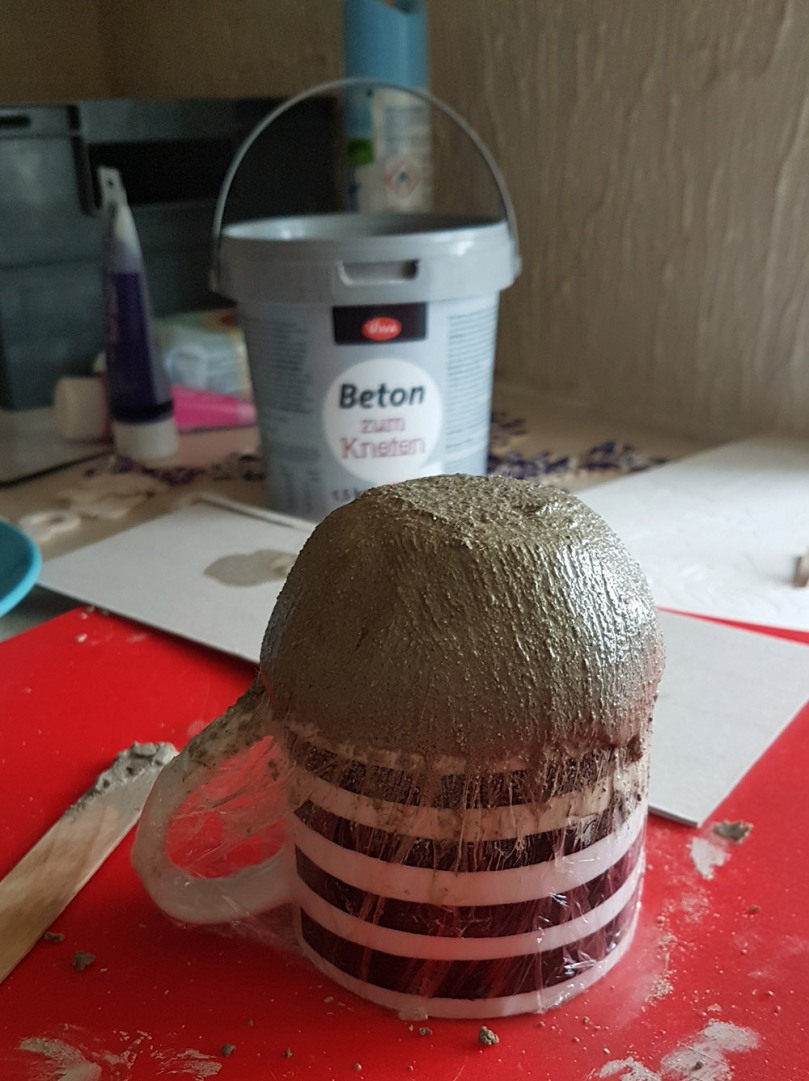 A little tricky to handle initially but it became a little easier as I worked with it.

After leaving it to dry I ‘knocked’ it off the mug.

The outside was quite nice. 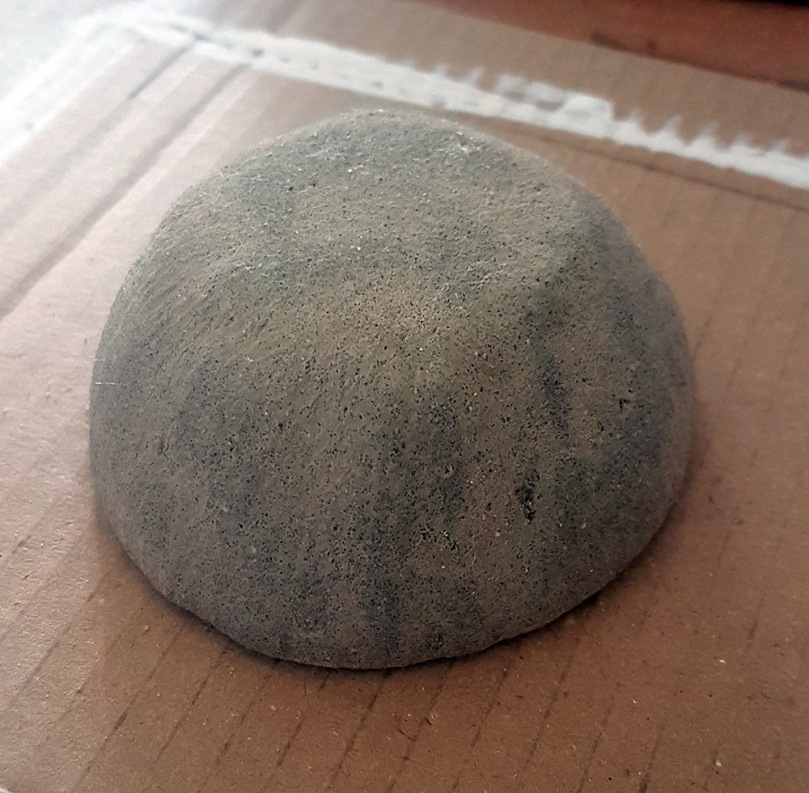 Not really convinced about the inside. 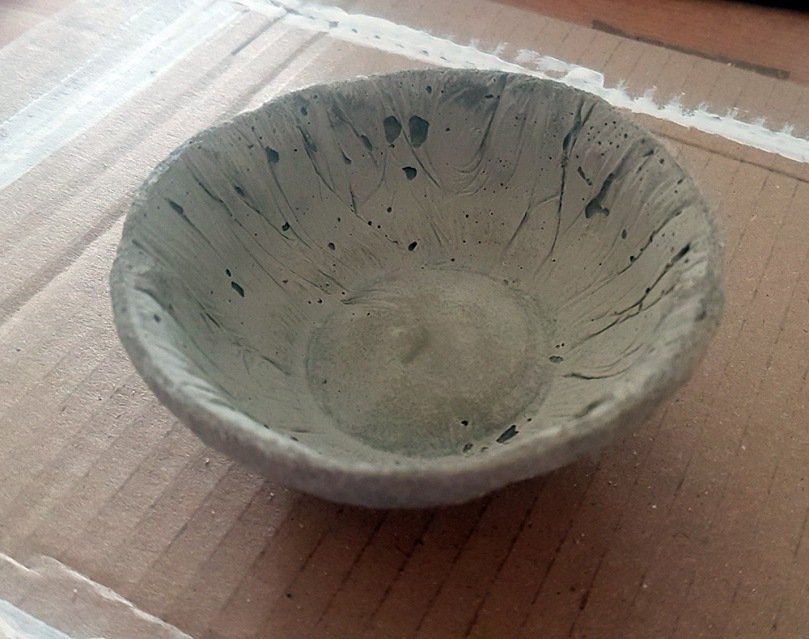 Hmmm. I’m not convinced about this. Maybe some gold and sparkle will make it nicer… 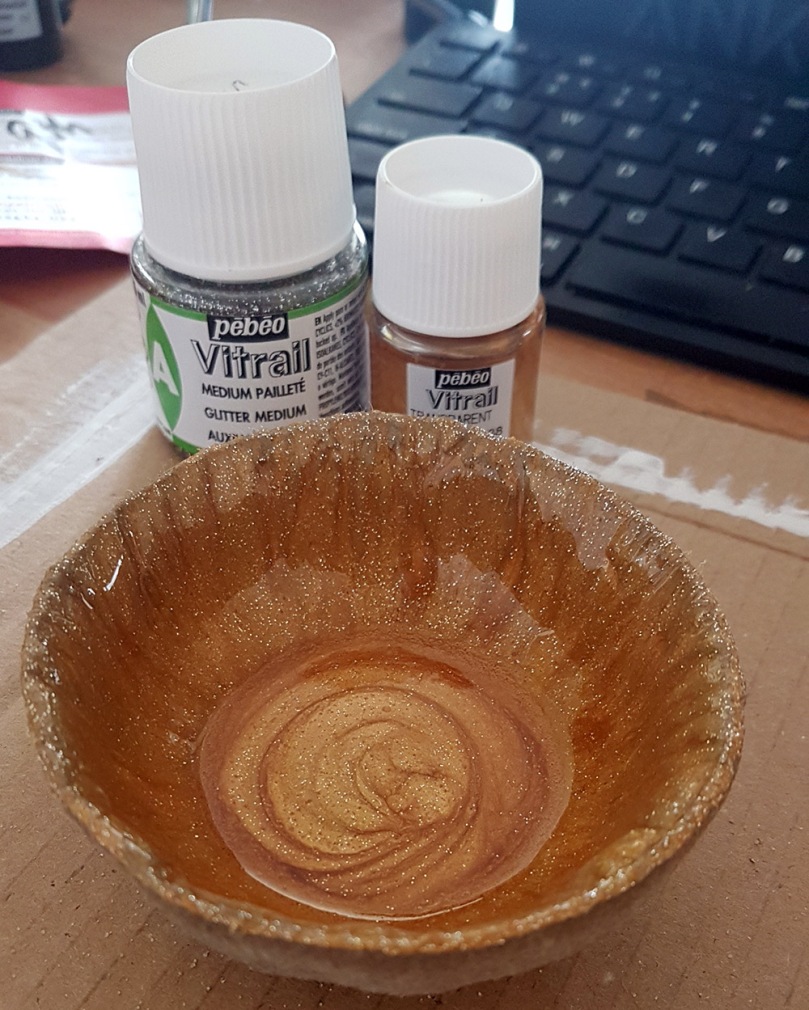 Don’t think you can’t make a purse out of a pig’s ear. Time for a rethink.

Rummaging through my brain for examples of successes with clays and pottery and the like a lightbulb went on so I dug out a large two-part clear plastic bauble.

I then used a silicone basting brush to apply a thin layer of olive oil to the inside of one part and the outside of the other.

When mixing up a larger batch of concrete for kneading this time I added a little more water than was advised so that it was more like a slurry or thick casting slip.

This was unceremoniously plopped into the half of the bauble with the olive oil on the inside. I then settled the second part into the first part, pushing it down into the mixture a little way.

I then taped the two parts together while it dried.

The next morning I was ready to reveal the results – had it dried, will it still be sloppy paste? 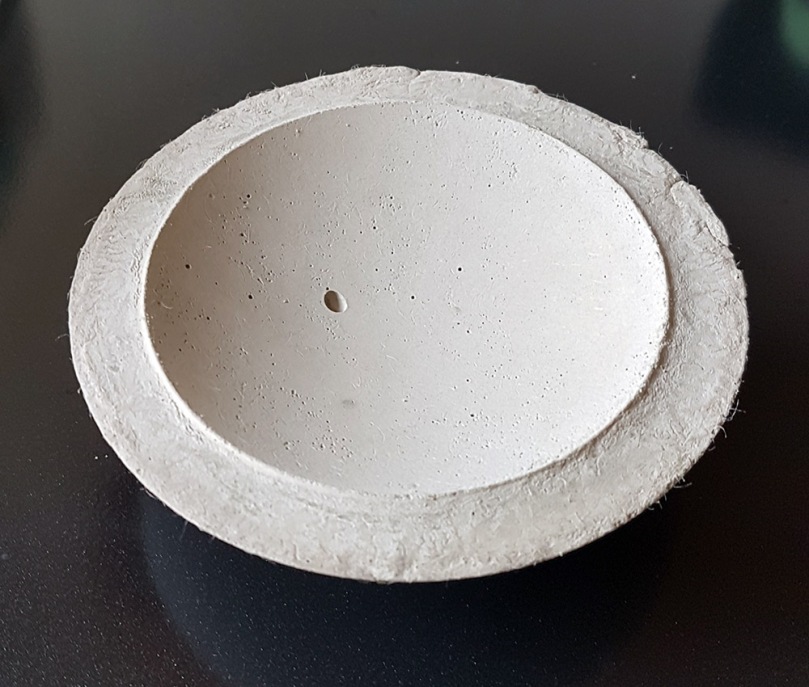 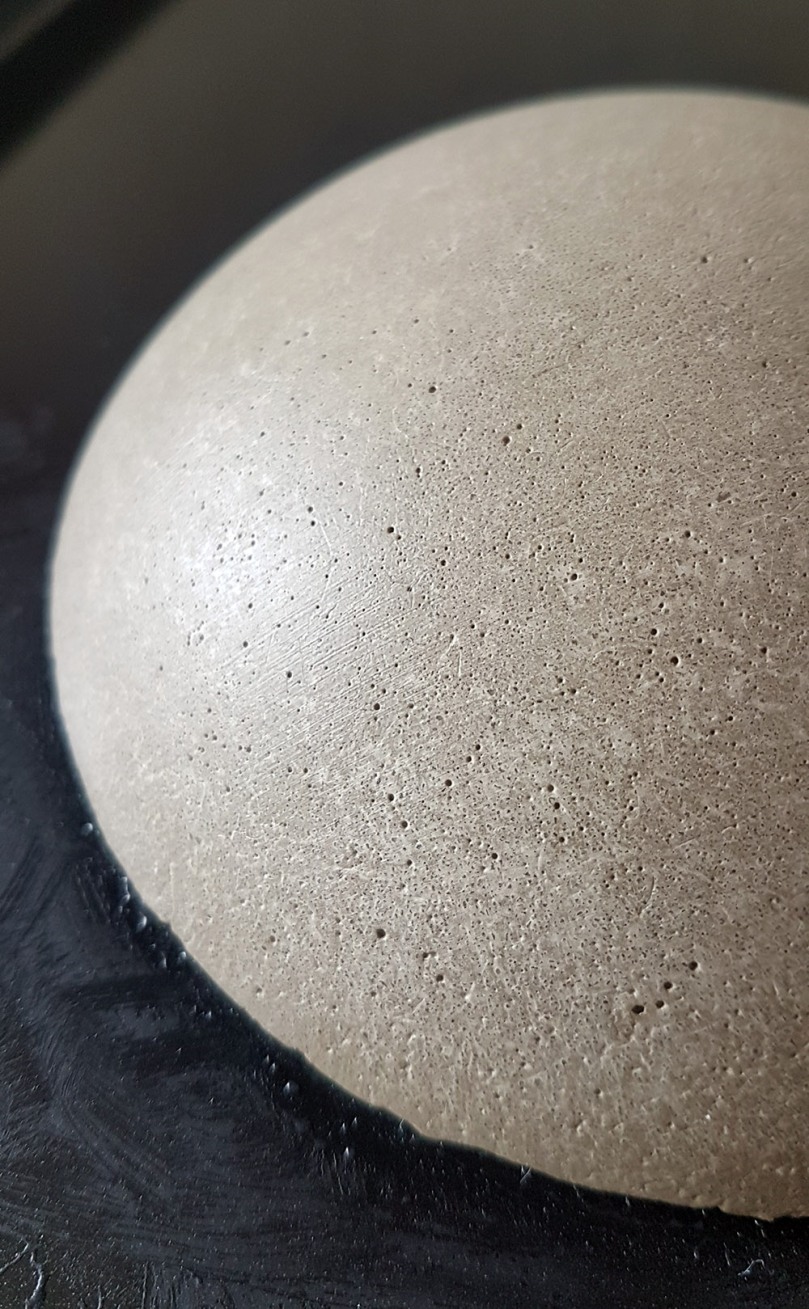 Actually much better than I had hoped. The surface was very smooth because of the surface it had been set against. Cool!

I gave this two coats of matt varnish to seal it and then decided that I wanted to apply some gilding leaf to the central recess – but there’s a large air bubble!

Hmm, heavy carvable paste should sort this out so I smeared on a thin layer and let it dry. 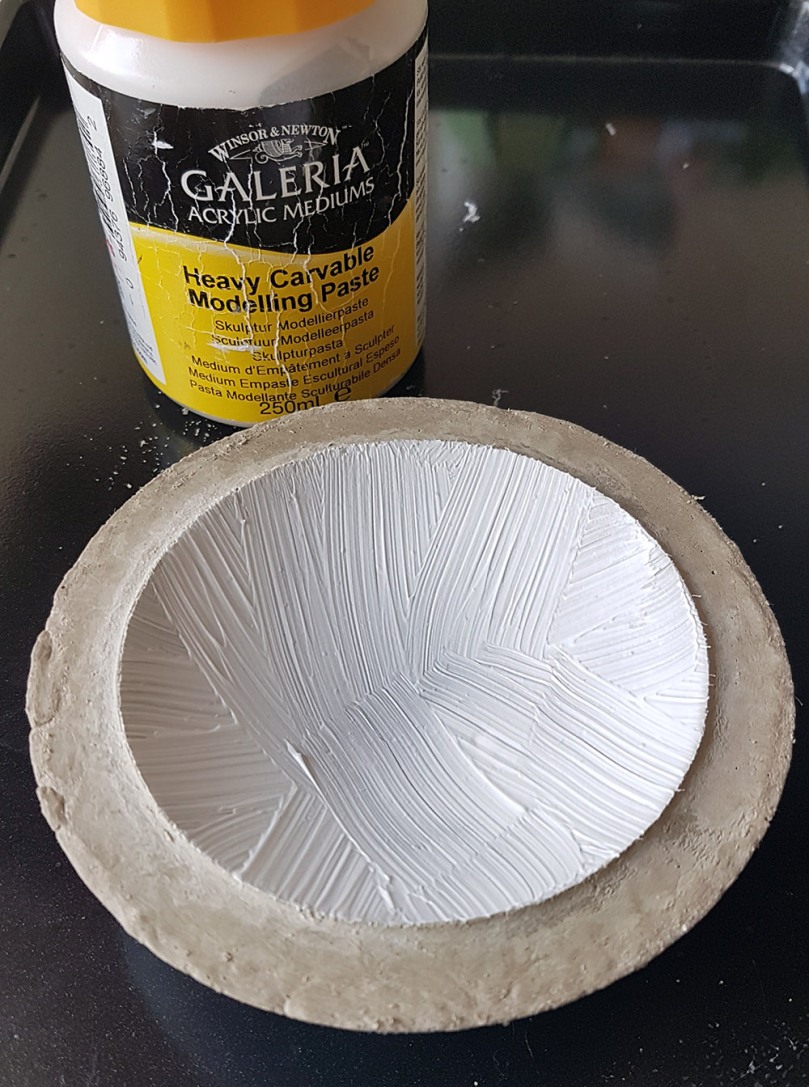 Then used some fine grit wet/dry sandpaper to rub most of it away again. 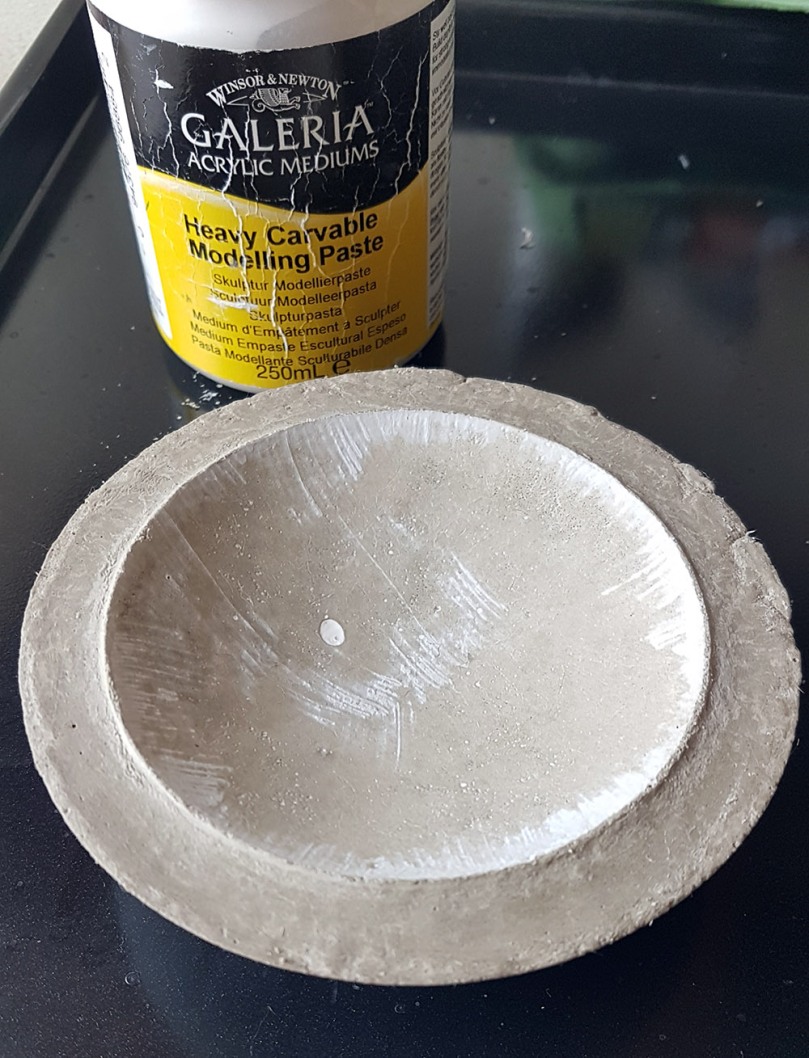 Even that looks nice.

Right, time to get that metallic leaf on. First, a layer of Pebeo Gilding paste that I left to dry for 15 mins – aren’t I being a good boy actually following the proper instructions, lol! 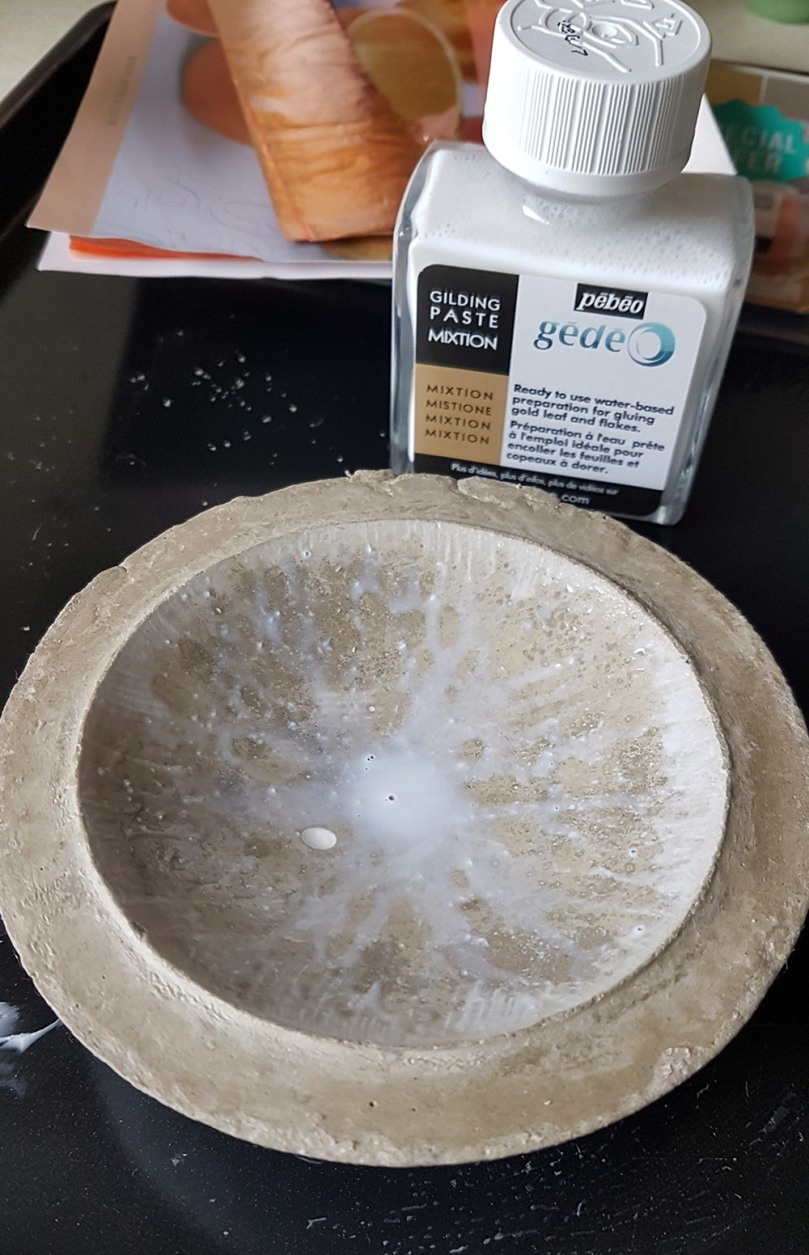 Then it was on with the copper coloured leaf. The excess leaf was brushed off with a soft brush and then I burnished the metal leaf lightly with my finger. 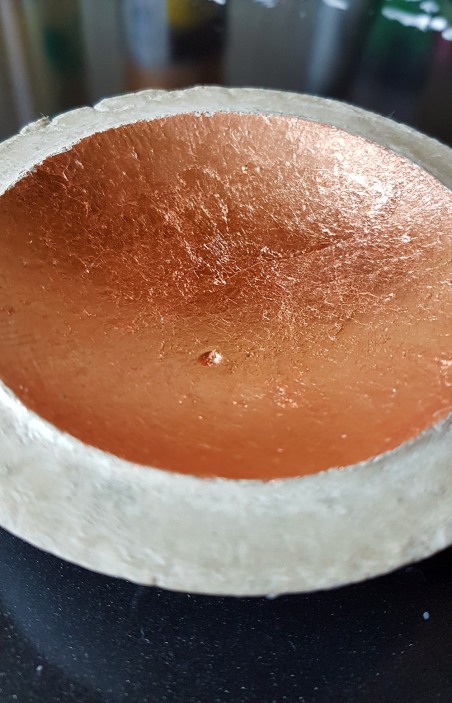 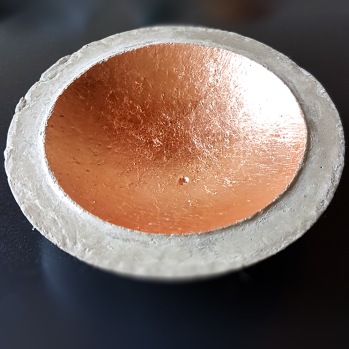 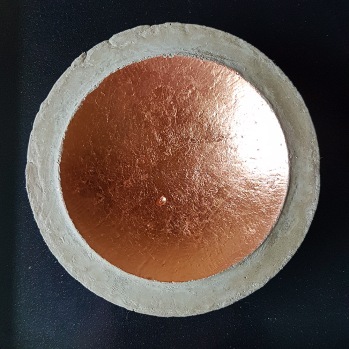 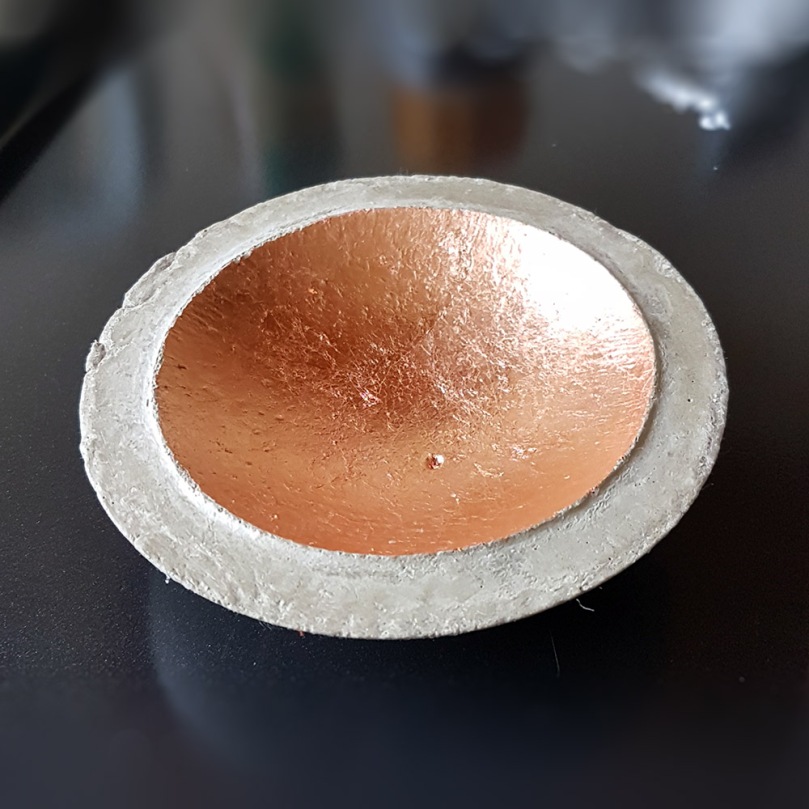 Ya know, I freakin’ love this! It’s hard to see the texture and glow from the copper in the pictures but this is going to look great in my lounge – when I finally get the decorating done and stop mucking about making stuff.

Oh, did you notice that the air bubble is still there? Well, the plan to fill it didn’t work so I gave up trying to plug the hole in my concrete bowl and just went with it.

Anyhoo, what do you think? Something you’d have a go at?

Many thanks for stopping by again. Look forward to sharing more with you soon.

10 thoughts on “Plugging The Hole In My Concrete Bowl”