The bid to decorate my new home with handmade items continues with an acrylic paint poured clock that is a riot of colour.

Although technically only a project that would have taken a couple of days it has actually taken a while to create as I have been back to it a few times, unable to finish it through indecision, however, this week I managed to pull things together and thought that it was a good time – no pun intended – to share it with you.

It is a few months since I did a series of posts and a video based on the acrylic paint pouring process that seems to have gripped YouTube with a fever. This, however, was where this project actually started so you can see that it took a fair while longer than it should have.

Oh, I mentioned the previous blog posts so might be worth me chucking them in here in case you haven’t seen this or wanted to go back for another look.

Using the same process as shown in those posts I decorated a circular piece of MDF that had a hole in the middle – a clock face if you will – and you will, because it was. Lol.

That is how it sat for a long time. Months in fact.

In the last week, I found some cool triple thick glaze that I thought would coat and protect it well so added a couple of layers and left it to dry. This is how it looked after the drying. 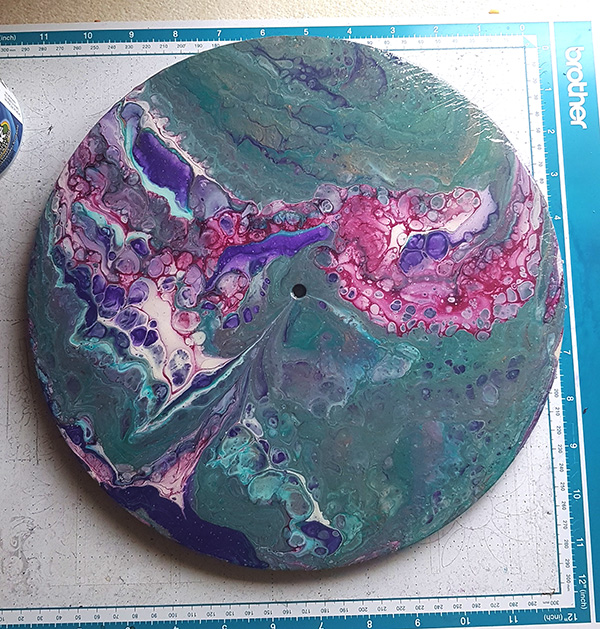 The glaze neither detracted or added to the colours – so that was good! Sometimes these glazes can change the colour properties but this was perfect.

The Personally, I love how the colours swirl and interact with each other so it was important to protect them.

I had used a fair few colours in this one. Also a copper metallic acrylic paint. 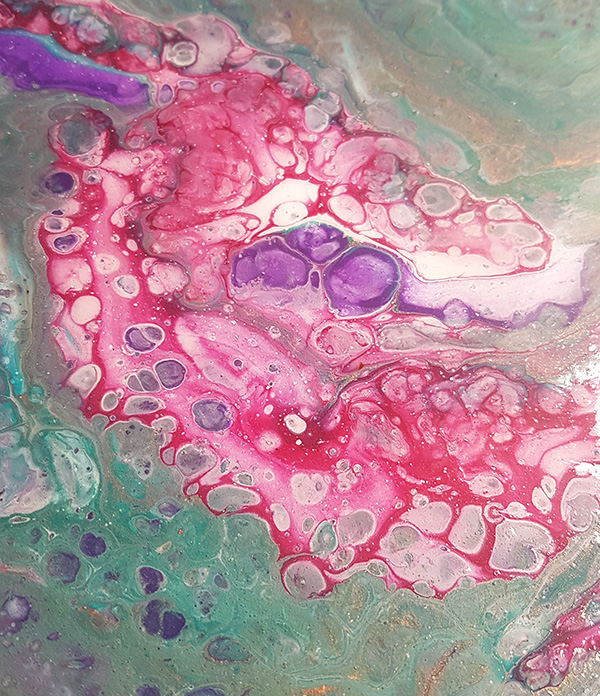 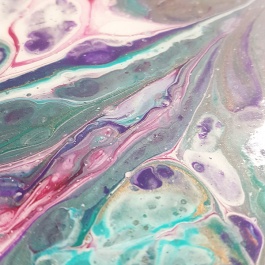 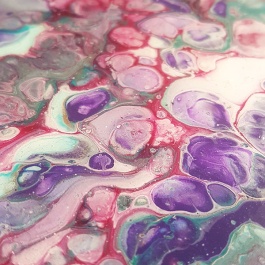 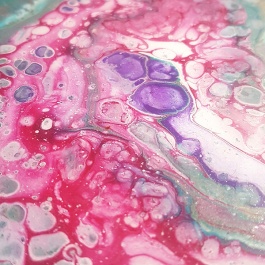 If you are looking for a similar glaze to coat your paint pouring, I used this one > Deco Art Triple Thick Brilliant Brush On Gloss Glaze via Amazon*.

Once all of the layers of glazes had dried I added the clock mechanism. 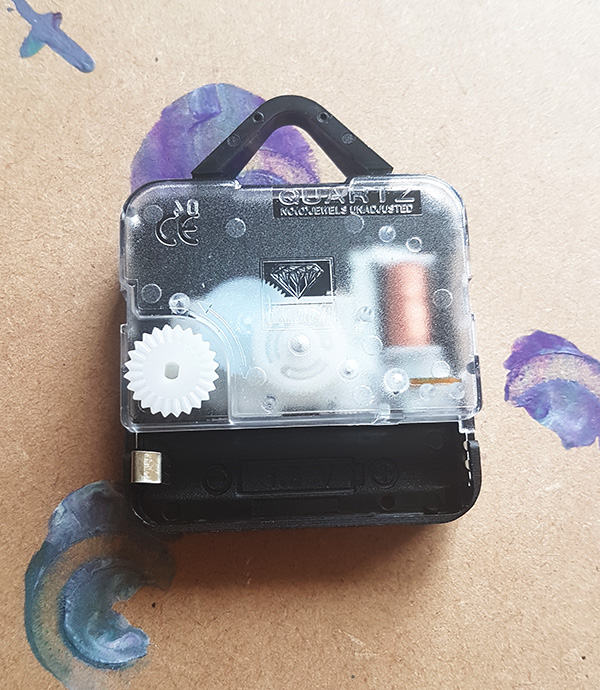 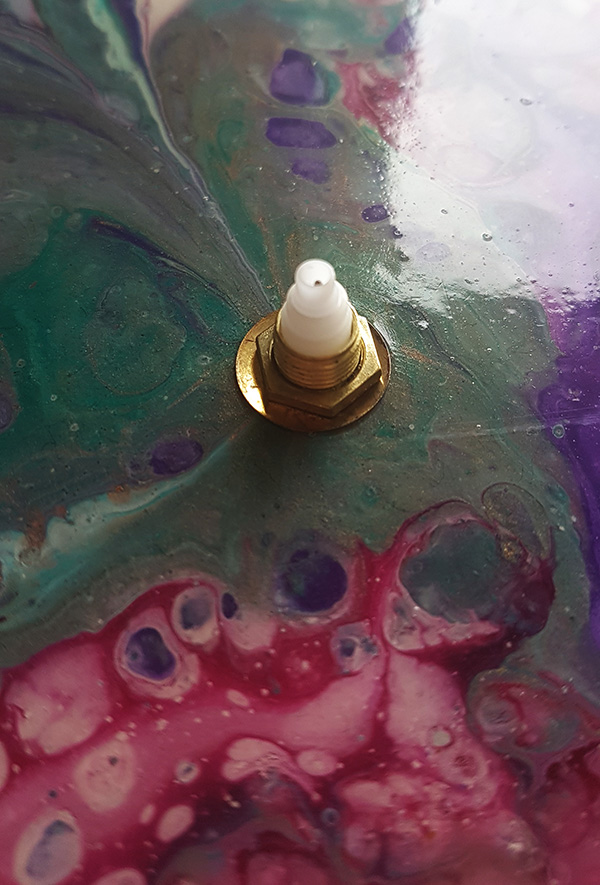 Nice and easy to fit.

Now, the clock hands were stark black and this is defo something that I didn’t want. Or did I? No, I didn’t. You can see another reason why this took a while, LOL!

So I had a good old thunking session and a root around the craft stash and found a few things that I thought would work well.

To decorate the hands I first peeled off the protective plastic layer. 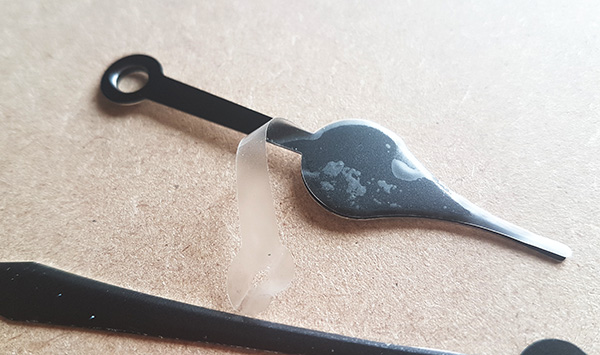 The next step was to mix up some embossing powders. I had decided that this was the best way to do this and it would stick well to the metallic hands.

I chose these because they were all colours that appeared in the paint pouring. A simple creative trick that helps a project come together. 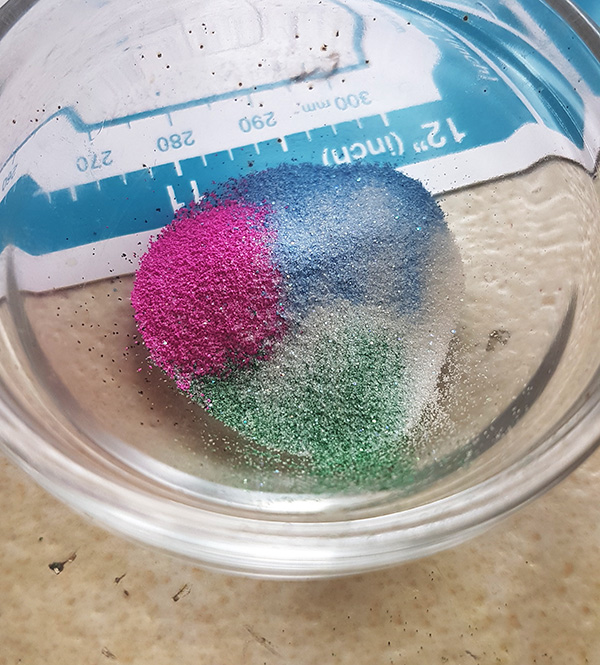 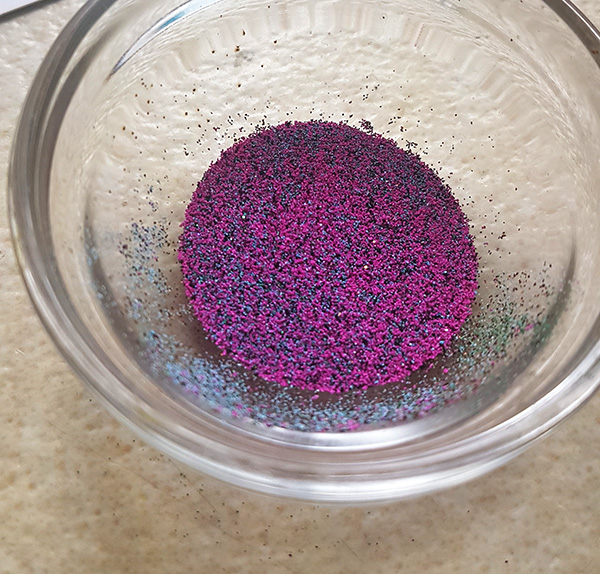 Most colourful salt and pepper that I have ever seen!

I used Perfect Medium from Ranger to stick the embossing powder to the hands. 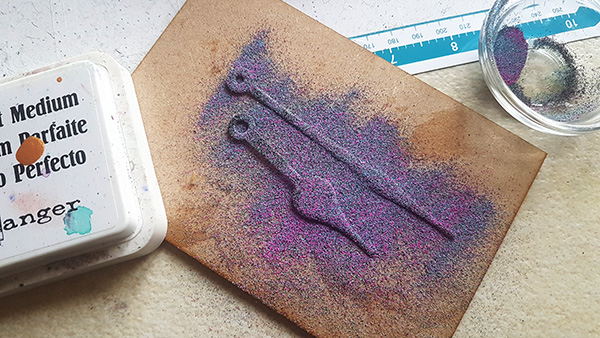 Then, heated it with a heat tool.

After heating I was well happy with the result – you never know until it’s heated what it will look like do you? 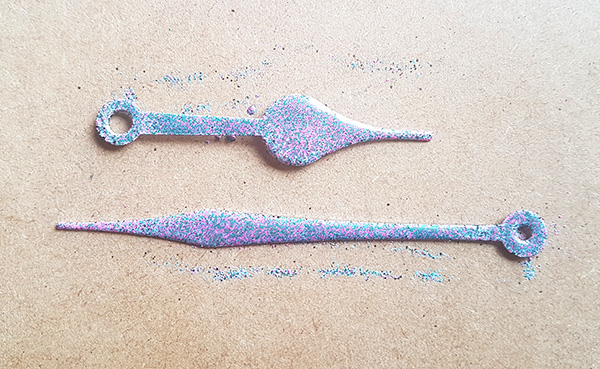 Although I loved this, I felt that it may be a little too similar to the background so, to differentiate between the background and the hands, I added a little edging with a white acrylic marker. 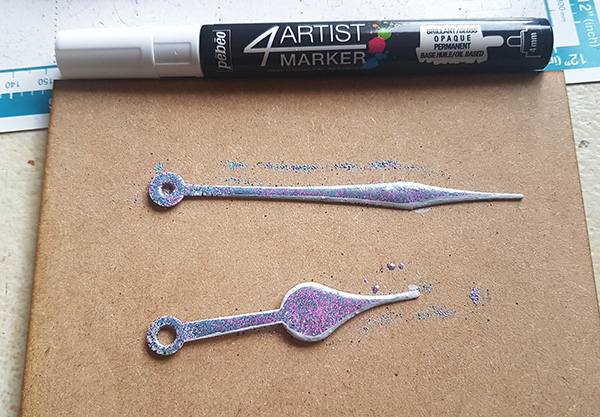 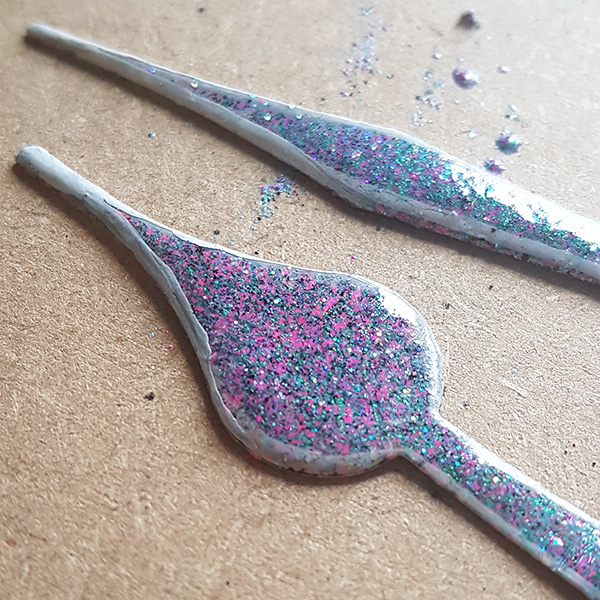 So the final thing to do was to add the hands to the clock. 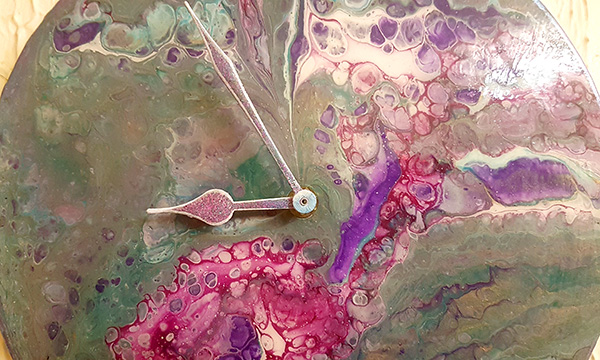 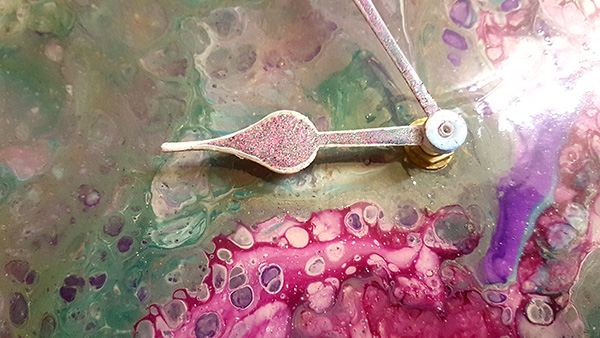 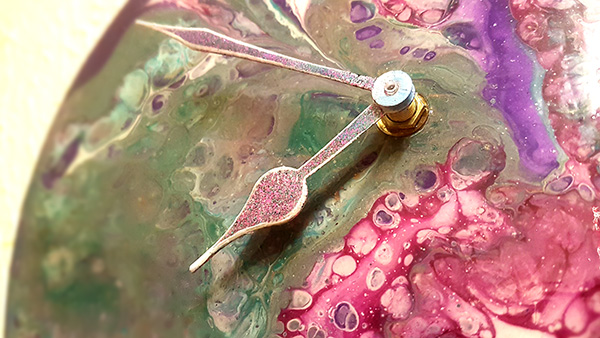 By the way, earlier on I attempted to add numerals off sorts with dots of dimensional medium but decided that this didn’t work so wiped them off before they had dried.

Maybe just another little something. A little pearlescent ink around the edges I reckon. 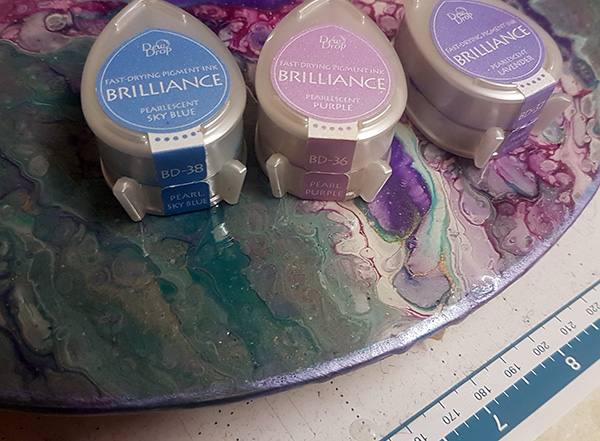 I may still add something with white vinyl in the future but for now, that’ll do.

Here is the ‘final’ thing? 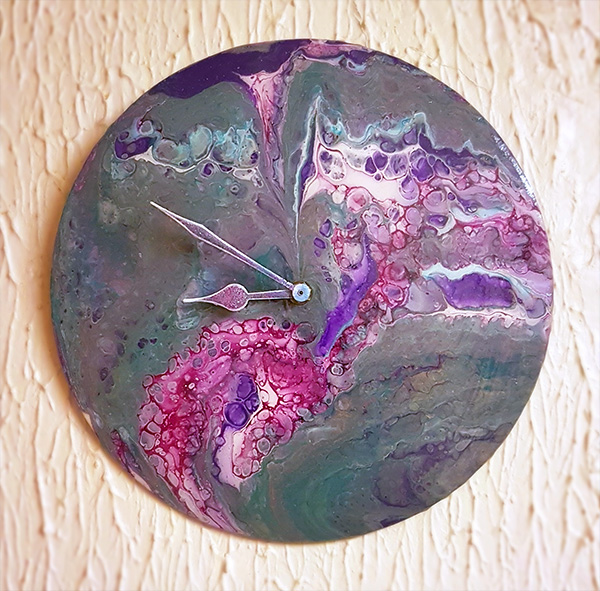 I still have to decorate the kitchen walls so imagine this texture but in mineral stone (grey). Think the clock will sit nicely against that.

Right, another clever creation is done, what do you think?

Would you have added something more? Numerals? Dots for the hours? Something else? I would love to hear your thoughts.

For now, though, I shall log off and go and do something productive, or lay on the sofa. Perhaps this can be both?

Thank you for stopping by and I look forward to sharing more with you in the near future.