Good morro good travel companions – how are you? Well, I hope.

Life has treated me well this week, despite the fairly shambolic weather.

This week kicked off with my arrival in Wales which, even in dreary weather was actually quite inspiring. 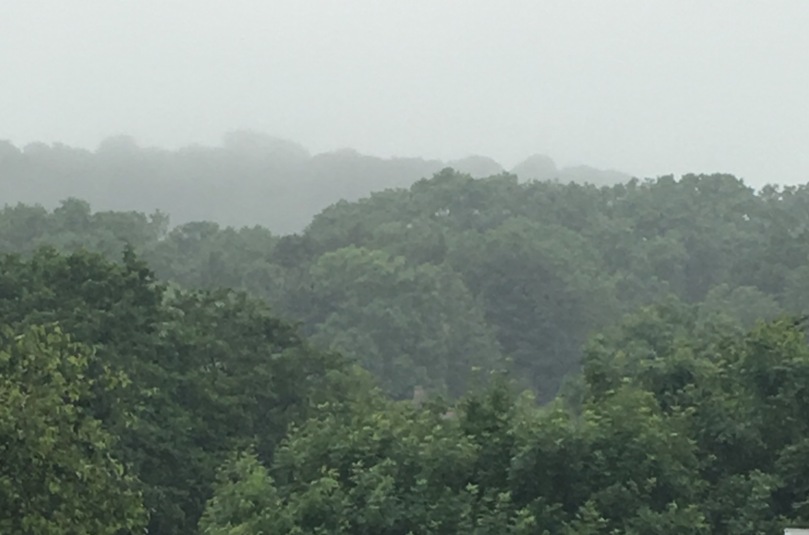 Anyway, not a huge amount of playtime this week however whilst sitting in a rainy car park in Barry I did make a start on these paper mache unicorns, giving them a couple of coats of gesso each.

Had to quickly dry them and add them to the work in progress basket (a genuine and real thing) and get the Tuesday workshop ready.

The workshop took place at the award winning shop, Dandie Crafts in Pontypridd – my first visit to Wales as part of this challenge :)

Debbie and Ailsa were on hand to see that the day went well. They even made sure to include Mandy-Jane, who was on holiday.

The workshop that was requested was ‘techniques for using dies’.

I happily demonstrated a range of ways to use dies in styles that you would not ordinarily expect. I don’t have any photos of ‘finished projects’ as we were just doing techniques so here are a bunch of shots of the ladies having a good old play. 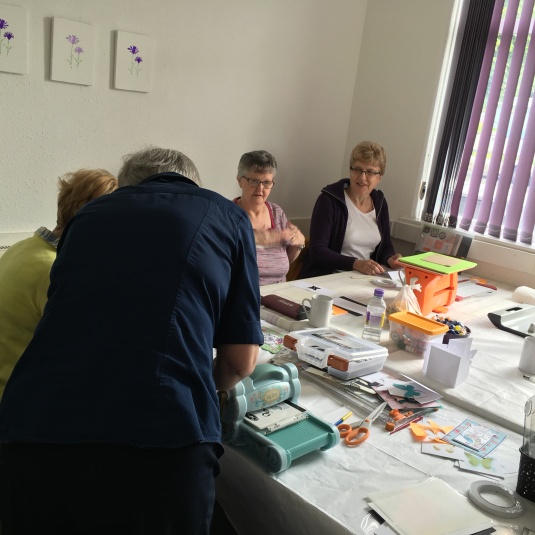 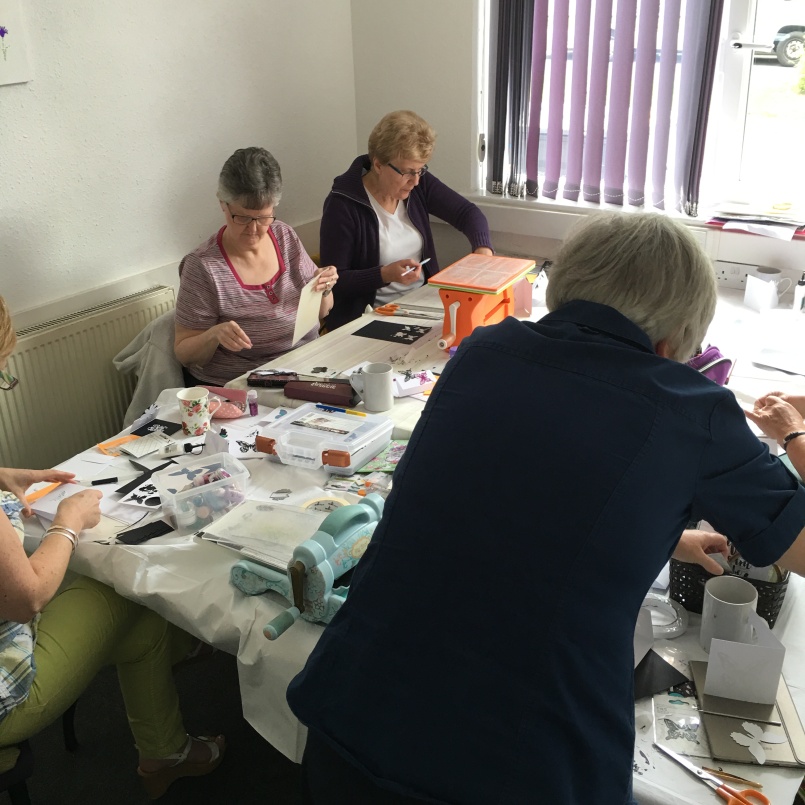 I will however try and do some blog posts in the future.

Now, the day had started out quite nicely weather-wise however during the day the rain had gotten steadily heavier and heavier so when it came to do the group shot with Maisy, we decided it would be best to try and do that from indoors.

With the view of Maisy only being available from one angle and the desire to get everyone in, I suggested that the ladies all lined up on one side and then I’d kneel on the table and stick my thumb in shot – assuming you’d only see my head and arm.

The crafty elf, Ailsa, got a wee bit cheeky with the angle though and got a little more of me than expected – I.e. all of me with my bum in the air! Lol! 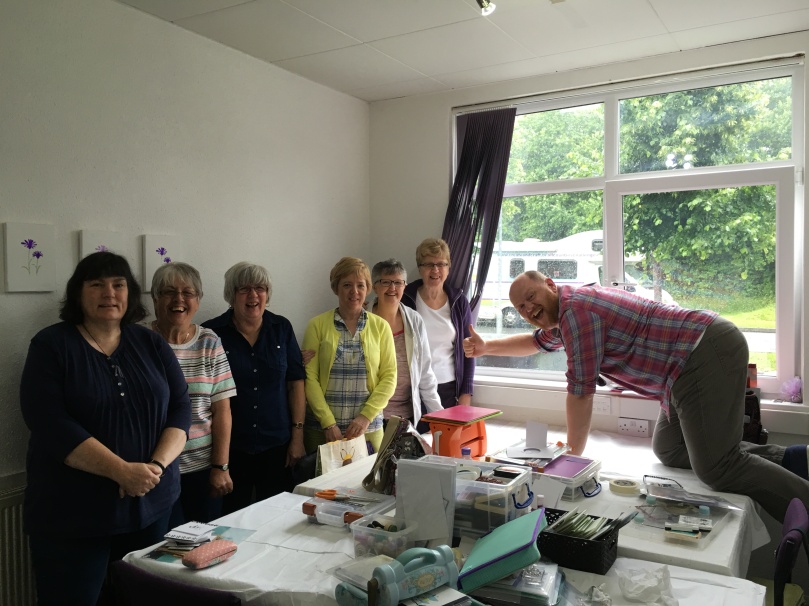 At least no one will forget that shot ;)

Anyway, workshop over and time to move on.

As I didn’t have anywhere set to stay where I was and the next workshop being a few hours drive away I thought that I would take advantage of the rainy weather and cover some of that distance before bed.

A couple of hours on the M4 later and I was sitting having a coffee at south Mimms services.

Wasn’t expecting that so decided to grab coffee and sleep there overnight and finish the drive in the morning.

I awoke as fresh as you can do under the circumstances, washed and hit the road.

If they had been open, and if I’d known what lay ahead, I would have driven there the night before! 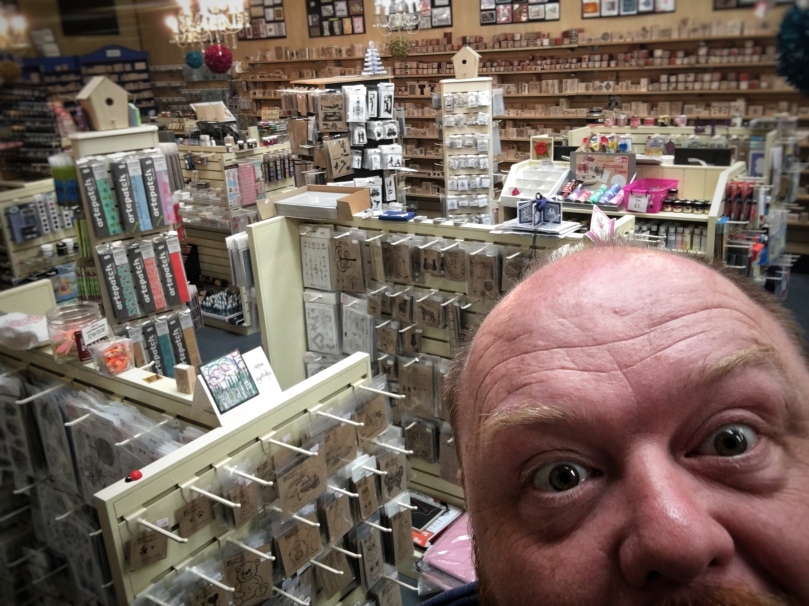 This is HQ of Stamp Addicts and also home to Saturday’s workshop. I was here to browse and shop – I mean pick up stamps for the workshop, yes, that!

After going through the checkout with my purchases – d’oh! – I grabbed the demo stamps and headed off to park up for a couple of nights and get sorted.

Here’s a photo of my organised and neat prep …

But wait! Where are the foodie shots John? Well, my dear reader I’ve just been a nibblin’ this week so not much to share. I did however make a right blooming delicious ‘toasted’ cheese sandwich with doorstep slices of both fresh bread and mature cheese.

All were cooked on a low heat for a while, having pre buttered the outside of the bread so that it didn’t burn too fast.

First, I am behind on workshop prep and second I had to move on from where I had previously parked.

My views this week have been made up mostly of service station car parks so I didn’t see any reason to change this but on the way between two car parks I did fit in a little shop ‘n’ dash run at IKEA as I needed a new towel and a picture frame.

If you’ve ever shopped at IKEA, you know that that isn’t how it works.

First I joined the queue for a filter coffee, which took waaaay to long.

Then, things just kept falling into my basket! I am proud of myself however as I resisted temptation BIG TIME! They had floral fabric on sale down from £5 per metre to £1.50 per metre, meaning that a 30 metre bolt would have been £45 !!

RUN, RUN AWAY FROM THE BARGAIN!!

Oddly, the guy in front must have got my shopping habit as he took eight bolts!

Anyway, I only ended up with some storage for food, a laundry basket, twenty picture frames, bathroom gadgets, kitchen tools, towel and various oddly named sweets so I think I got away lightly, lol!!!

Well, listen, the second workshop of the week arrived and as I mentioned, it was at the Stamp Addicts store in Kempston.

Vikki got a shot as Maisy and I arrived …

I had three projects prepared for today’s group, each using a set of stamps that the group got to take home.

Here are the examples that were created. 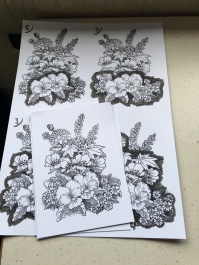 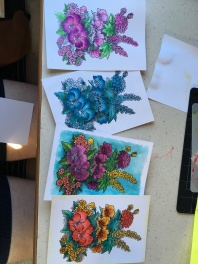 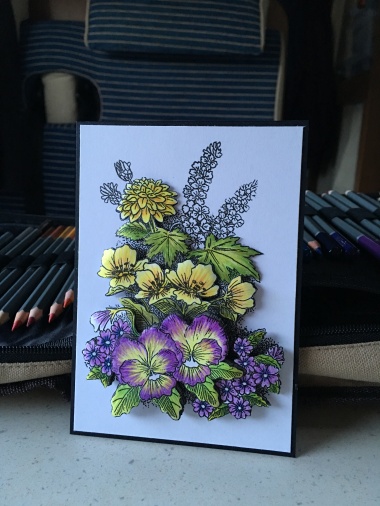 Anyway, the group quickly settled down to business … 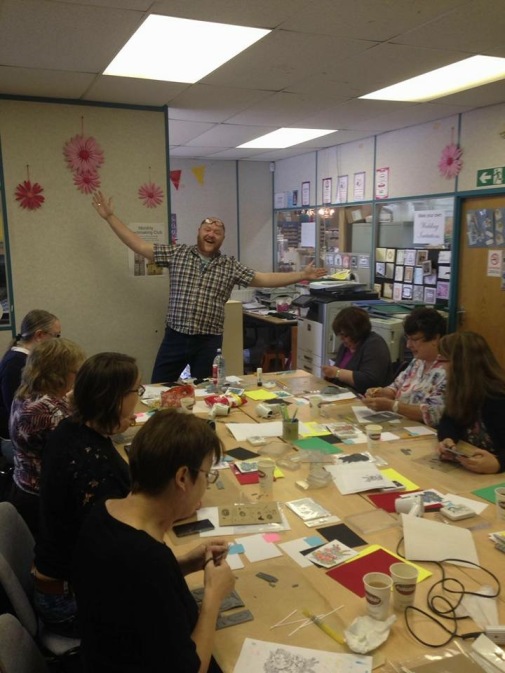 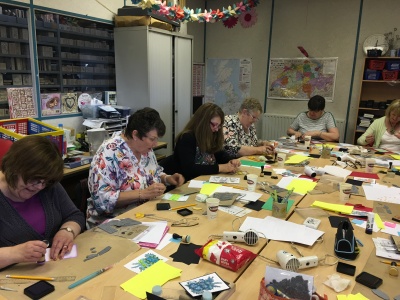 Much coffee was drunk, many biscuits eaten and much creativity happened. As always though things had to draw to a close and, while the rain showers held off, get outside and do the photo thing with Maisy – say cheese! 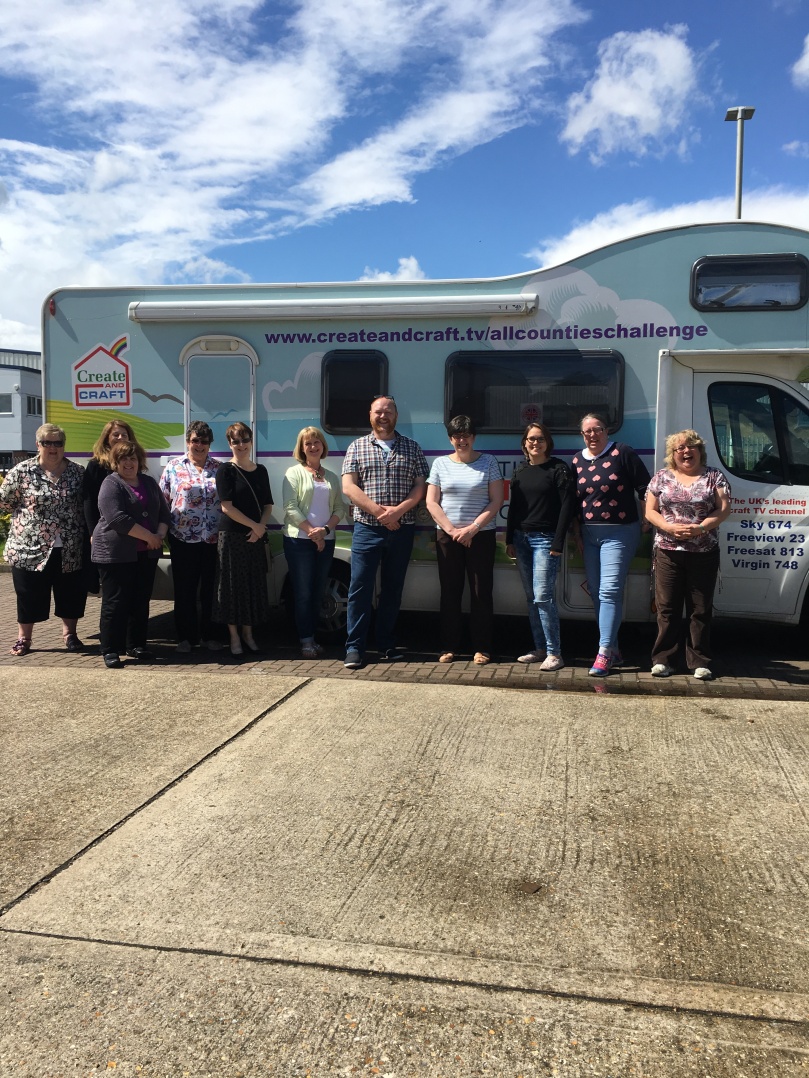 Ok, that’s about it for this week.

Don’t forget, I will be rattling collection tins at the Crafting Live event in Doncaster next weekend so if you have a piggy bank or a loose change jar and you are planning to come to the event, please do hunt me down.

Right, I had best be off. Doncaster awaits!

Catch you again next time.