So, we’re almost at the end of month five in the All Counties Challenge and life on the road is still going well.

But what else has been happening this week, you may ask. Read on and I shall flll you in …

Oh, before I get tot that, it’s probably an appropriate moment to give you an update on the fundraising target I think.

Thank you to everyone that has contributed in whatever way they chose, every single penny is appreciated.

Beyond that I am over the moon that more and more people are speaking out about mental health – it can make such a difference in someone’s life.

I’ve been in touch with the folk at Mind to get more information about what the fund raising will be used for and why they do what they do so I’ll be popping that into a blog post for later next week. It’s definitely worth a read.

Right, so what else has been going on?

Well, I have become more and more convinced that my bad eating habits are contributing to my state of mind. It’s not the whole story, but I think you’ll agree that some foods can make you feel a particular way.

Realistically I think I’ve known it for a while however this week I have been making a concerted effort to eat better by cooking fresh.

Here is one attempt – a bacon, leek and mushroom broth. 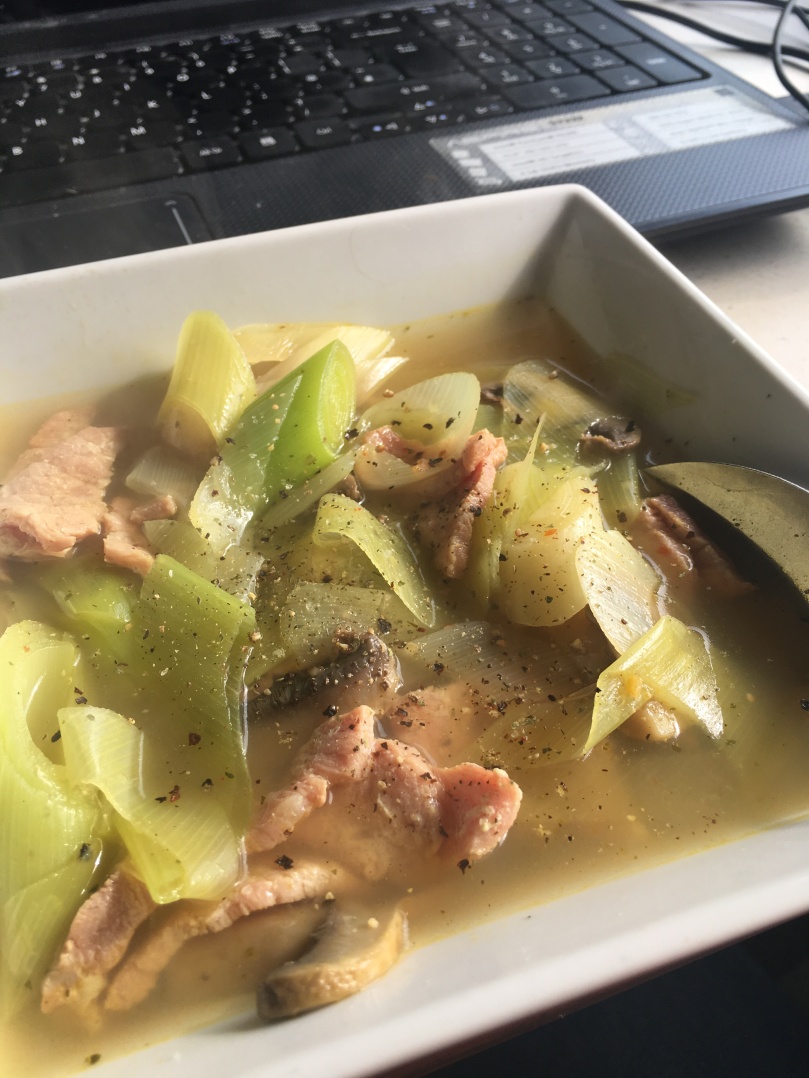 Actually quite impressed with myself on this one as it turned out quite delicious, unlike the beef and (excessive amounts of) onion consommé. *whiffy breath*

Did keep the flys away though, so that was a bonus.

I don’t really have anyway of storing food for long periods of time so I am also learning to cook on a smaller scale, which oddly I have found to be more of a challenge than batch cooking as quantities are less forgiving.

Broth can sometimes turn out looking rather unattractive and ‘ploppy’.

I shall persevere however.

Anyway, the goal of this ‘healthy’ eating has a purpose. I am hoping that it will allow me to wake up feeling more like this …

… than a sloth with a crushing hangover.

Now, don’t get me wrong, this hasn’t stopped the odd nibble. 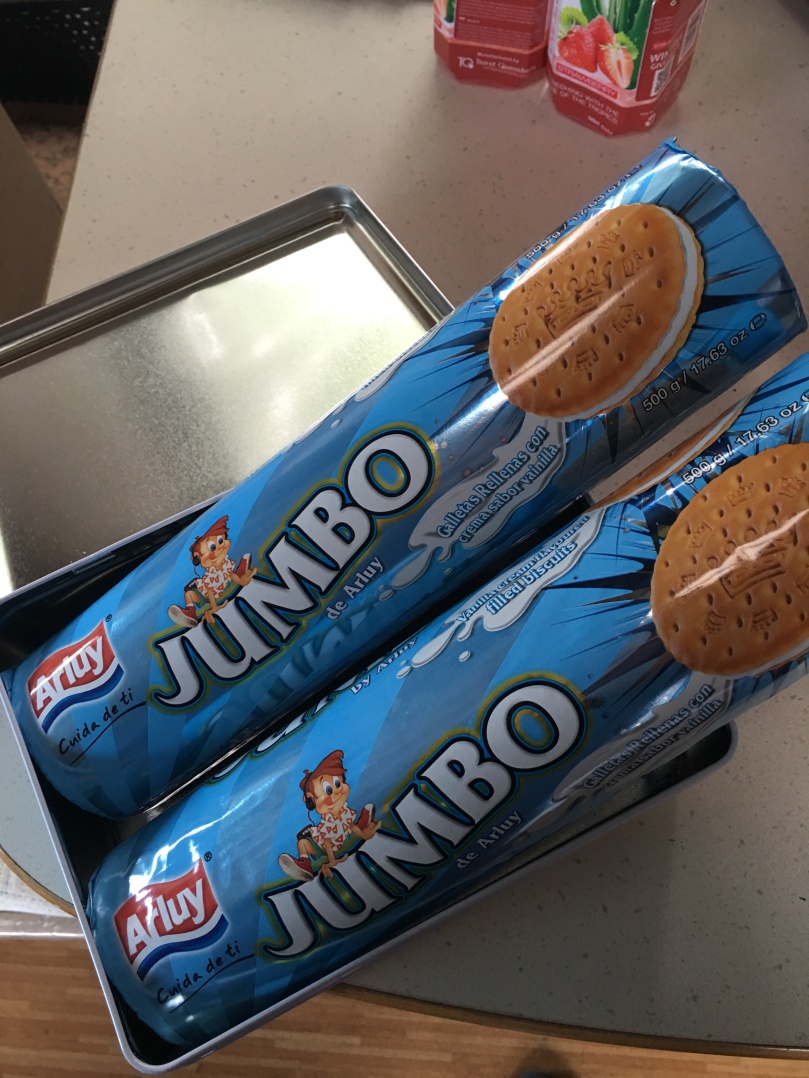 I’m just trying to swing the balance the other way.

Hahaha, yes, the biscuits did not fit, but with a little neat organisation … 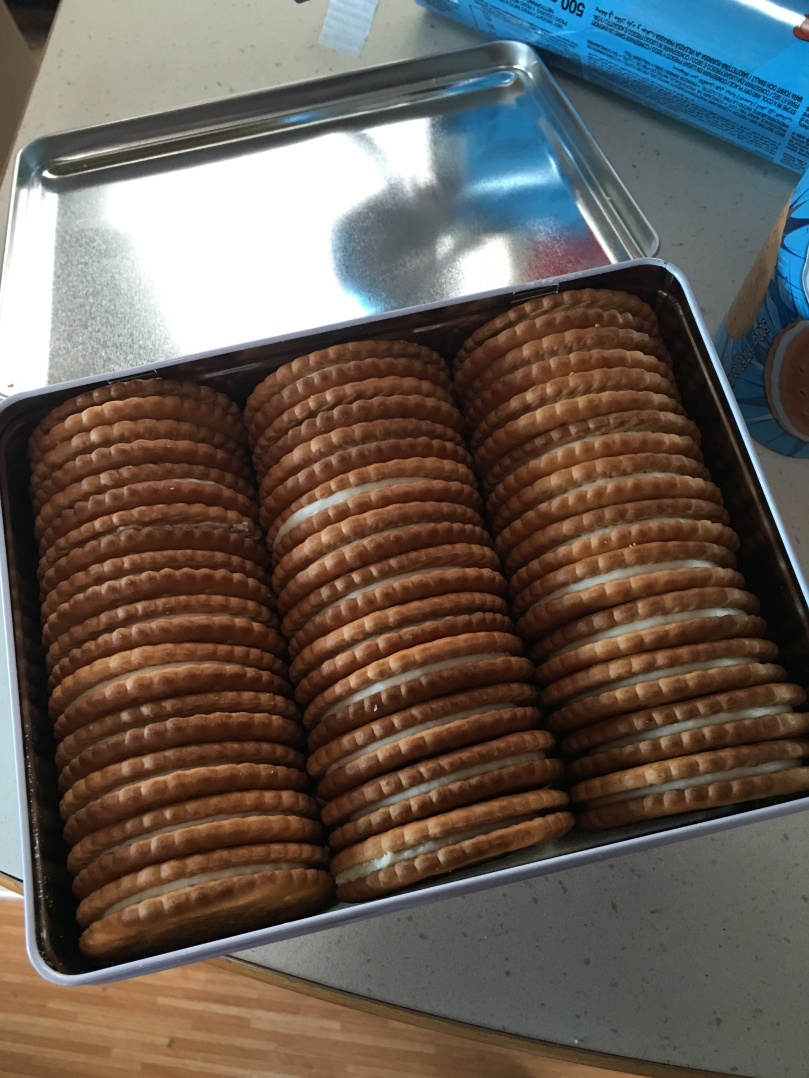 Believe it or not, even these have a purpose.

These are the emergency biscuits; the ones that will only come out when it’s been a big bad blue old day. The kind where you burst through the door and demand in a theatrical voice, “Bring out …

Hehe. Little bit naughty but I hope that it’ll help curb the snacking.

For days where snacking is inevitable, I shall try and resort to nuts and seeds and have crafted my own special little mix of pistachios, Brazil nuts, pumpkin seeds, pine kernels, caramelised cashews and other ‘bits’.

I even adapted the Milkshake song by Kelis to make eating them fun.

You know you’ll be signing it next time you rip open a bag of KP, right? Lol! ;)

To add a little smile in the mornings I have also invested in a cheerful mug in which I can pour the tea or coffee.

Silly little things aren’t they? Believe it or not though, they do help me. Which is nice.

Anyway, eating and snack organising haven’t taken up the whole week believe it or not. 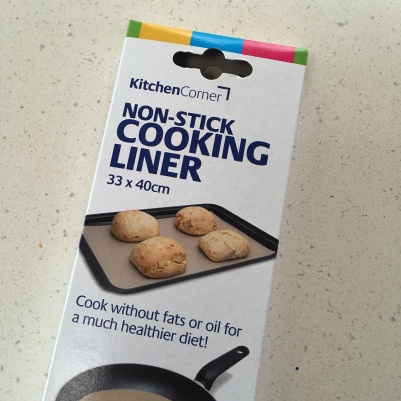 … any guesses what I will be doing with those?

Of course there was also a workshop this week. One that turned out to be rather a rather special one for a number of reasons.

The venue itself, which was the Rowallane Community Hub in Saintfield, County Down, was absolutely lovely. You could tell that the volunteers that run it cared about it deeply.

The hub is nestled through an archway on the Main Street which leads into a peaceful and well kept courtyard.

Inside it was peaceful and well lit, with lots of daylight.

There I met the lady that had invited me to Saintfield, Sharon Walker! 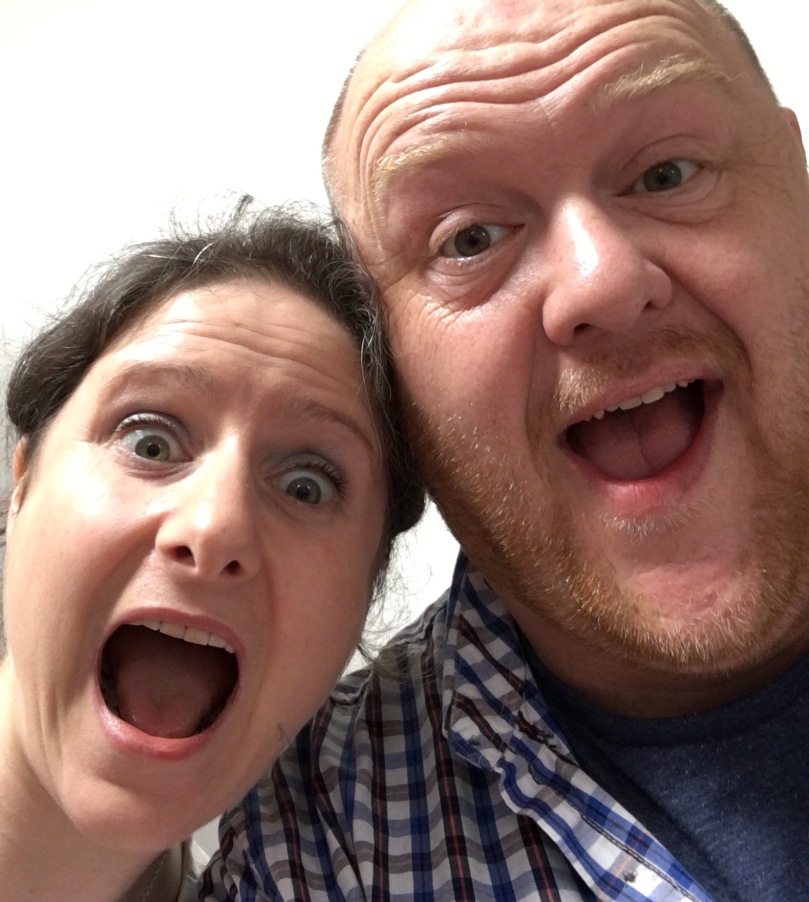 Sharon is a bubbly, vibrant lady with a heart that out-matches her modest height.

Sharon had also helped spread the word (as this seems to be how things work in Northern Ireland) about the workshop and so we had a large group in attendance.

We soon got down to work with Gelli Plates, supplied by Clarity Stamps, and made some papers with which we then covered some MDF projects from Fernli Designs. 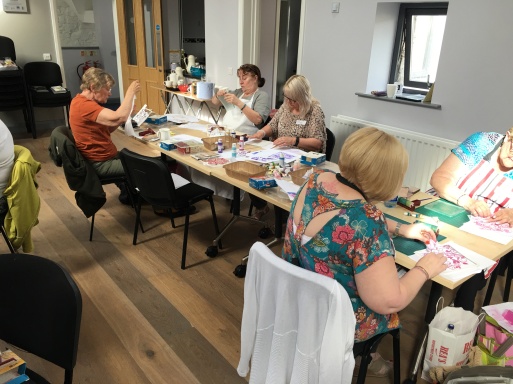 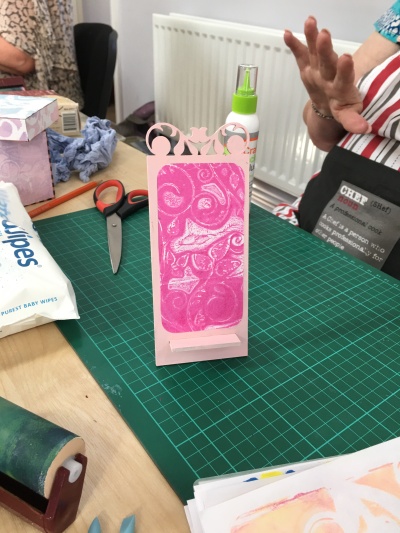 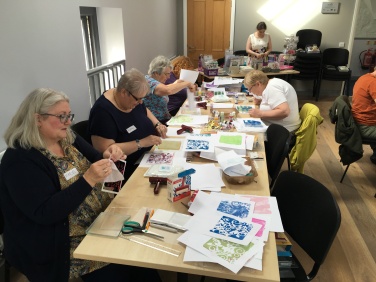 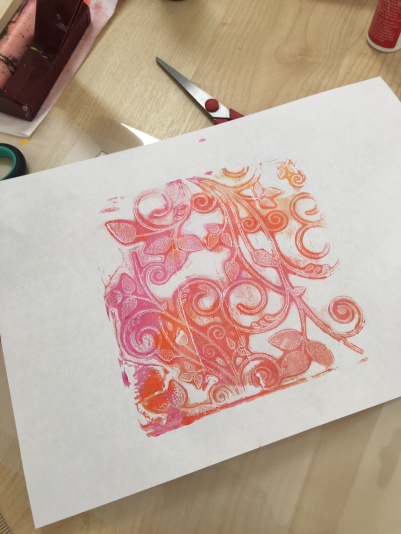 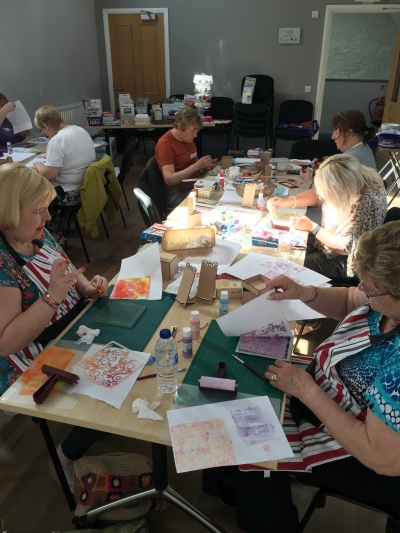 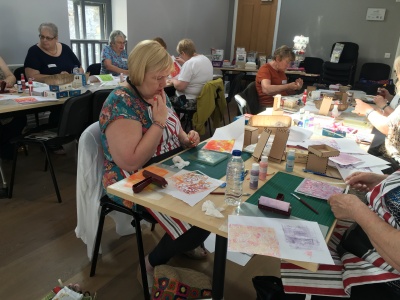 The creations were as unique as their creators with styles ranging from that of the traditional to the Klimt!

It was a lovely mixed group and it really felt like this group would go on to stay in touch with each other and build on the already established creative community in the area – which was quite touching.

Something else that made this workshop special and unique is that we did a live Skype chat with the challenge sponsors, Create and Craft TV!!!

The lovely Jenny Clearey was presenting the show that we went live in and she had many questions, thankfully I was able to answer them without stumbling to much.

So seamless was this experience that it was done in a flash!

Did get chance to introduce Sharon to Jenny and the audience, and get her to do a twirl of her amazing creative dress, and also to get a quick wave from the ladies hard at work though :) 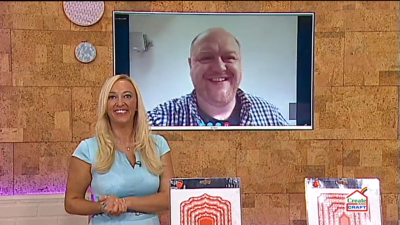 I’m truly blown away by how this can happen with just a mobile phone in my hand. Amazing isn’t it?

Anyway speaking of going by in a flash, the workshop squealed to a halt and it was time to do the group photo.

… but played the polite version where they all offer the chair to someone else.

One of the group had to leave a little earlier but we still managed a mini-group shot.

… and once the musical chairs winner had been decided we were ready for the shot.

What a fab bunch – thumbs up for this lot!

By the way, they were laughing because of the shine on my head. Lol!

Right, that’s about it for this week.

Still paces available for next weekends workshop. You can find more details on the itinerary.

… Or, if you would like to get hold of an official All Counties Challenge colouring postcard book, you can do so via Create and Craft TV – all donations (via either method) go directly to Mind.

Been good chatting, I look forward to seeing you all here again next week.

9 thoughts on “All Counties Craft Challenge Diary – My Nut Mix, A Creative Community and A Live Broadcast”