In my recent Christmas Is Coming post I showed you a project that I had made with a chipboard kit from Georgina Ford.

I also eluded to the fact that I had been working with the Poinsettia Wreath Kit, also from Georgina’s range – well, finally everything has dried and it’s ready to be revealed …

Well, I didn’t want to do just the same as I had last time and I haven’t done anything messy in a while so I decided to get stuck right in with this.

As you may have seen last time I did still start with a base of white acrylic and then a coat of traditional colours (red/green). 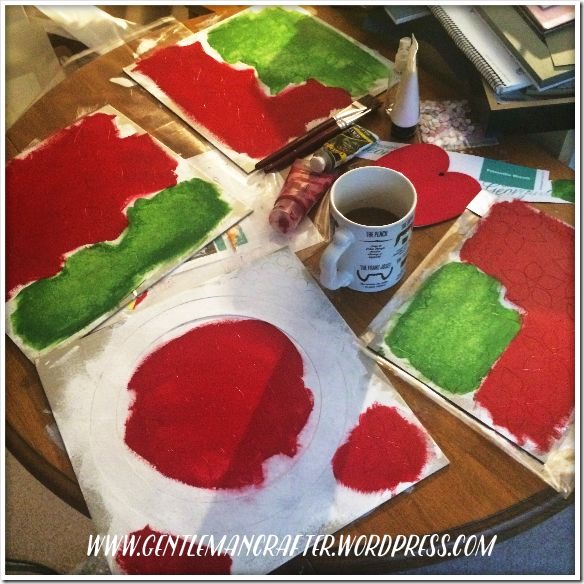 This was so that I still had these colours to warm up the background.

I then set to work with some Daler Rowney Artist Acrylic Inks (Standard Purple Lake and Pearlescent Sun Up Blue).

I dripped the purple on first and then dripped in the blue. On some of the Poinsettia petals I swirled the colours about with a cocktail stick to give it a bit of a marbled effect and let it dry.

After letting this dry, I then added a light coat of glitter glue and waited for that to dry.

The final coat was a spray of the Crafter’s companion Spray and Shine (clear gloss coating).

They looked like little starlit galaxies to me! Well happy with those.

Following Georgina’s instructions I then layered up the petal sections.

Wanting something impressive to feature in the middle of the largest group I had a rummage in my “made this for later” box and found a clear resin cabochon in which I had suspended some silver leaf.

I coloured the back of this with black alcohol ink and then stuck it in place with Pinflair glue gel.

For the wreath ring I decided to give it some texture and so I wrapped string around the bits that would show (or it would have taken me ages to do the whole thing) and then coated this in copper coloured acrylic paint.

The leafy sections I realised would need something that would sit well inbetween the copper and the purple/blue mix so, with the green background already painted in I reached for a metallic teal coloured paint and scrubbed this on – yes, scrubbed. I chose scrubbing as the application method as I wanted there to be texture here too.

I then went on to assemble the whole thing using Pinflair glue gel and the extra supports that Georgina had supplied in the kit.

As a final finishing touch I also added some mini pearls to the flower centres and also around the cabochon, just to add that little bit of detail.

Here are a few more views of the finished piece. 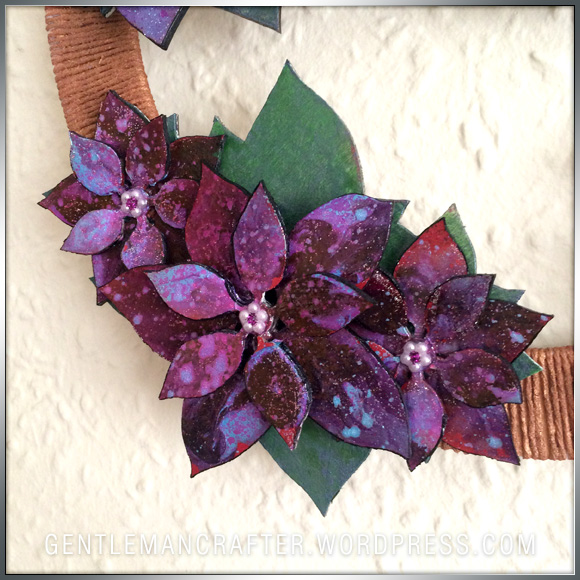 So, what do you think?

Not traditional but yet it still gives me the Christmas vibe and, cheekily enough, it’s probably something that I wouldn’t have to take down to soon either as it could work year round couldn’t it?

If this, or the last project has inspired you to try out some of Georgina’s range, then please do head over to www.designsbygeorgina.co.uk and see what she has available – as you’ve seen, it’s more than Christmas and there are stencils and stamp too.

Many thanks for taking the time to read this little blogette and I hope that you’ll pop by again soon as I have been playing with some of Georgina’s stamps recently too!

As always, if you have any comments or questions about this post then please feel free to use the comments section below. Also, If you know of anyone that would appreciate reading this post, there are handy sharing icons below.

12 thoughts on “Christmas Is Coming, Again”