After completing the recent run of Fabric Friday Fat Quarter Fun blog posts I left you with a picture of some of the leftover fabrics.

This week, instead of buying more fabric, I decided to give a new project a go using that leftover stash.

I racked my brains for an idea of what I could do. Although the fabric was leftover I was limited on choices.

Then I remembered that I had had a go at braid quilting quite some time ago, and in fact showed you that creation on this blog. If you missed it then, here it is. 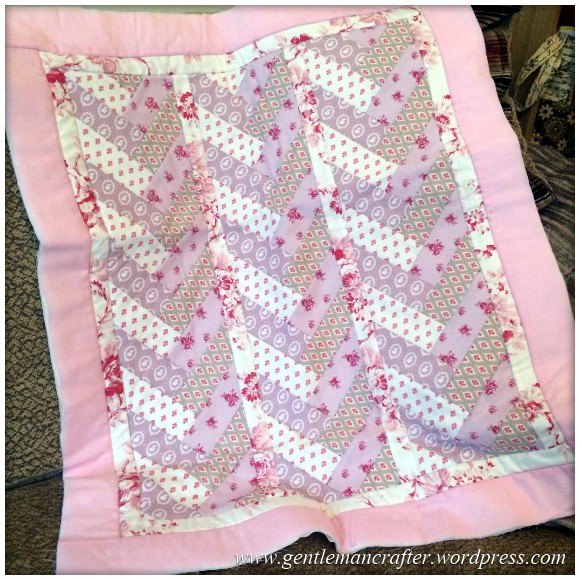 That one used Tilda fabrics in case you were wondering.

Last week I liked how the black had really highlighted and outlined the colours from this fat quarter set so I brought out some of that also.

After pressing the fabric I set to work with my rotary cutter and created as many 2″ x 7″ strips as I could from each colour. 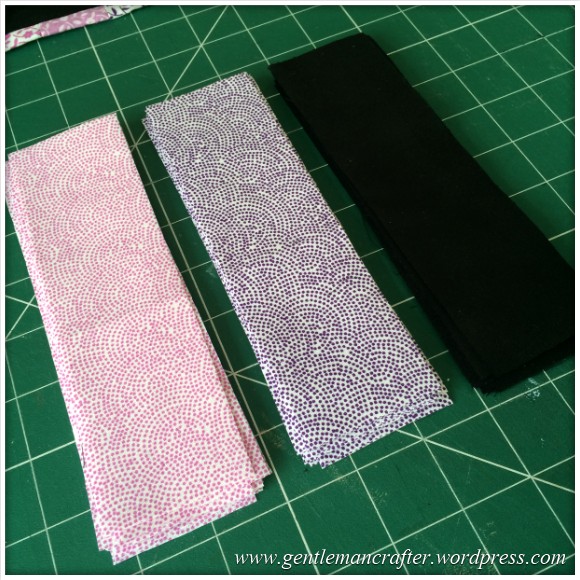 I then also cut some small quarter square triangles. 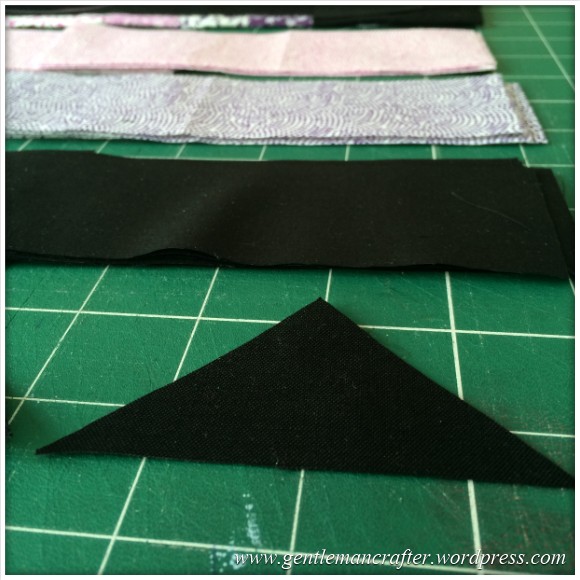 These triangles formed the starting point of each braid strip.

I began the strip with two black pieces. 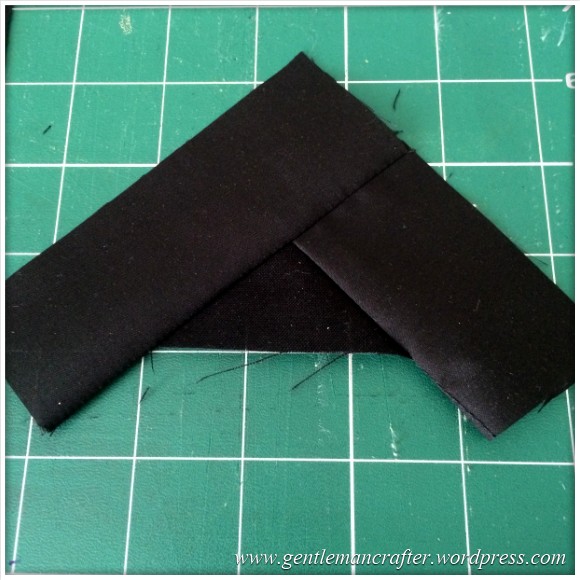 Then added a purple strip. 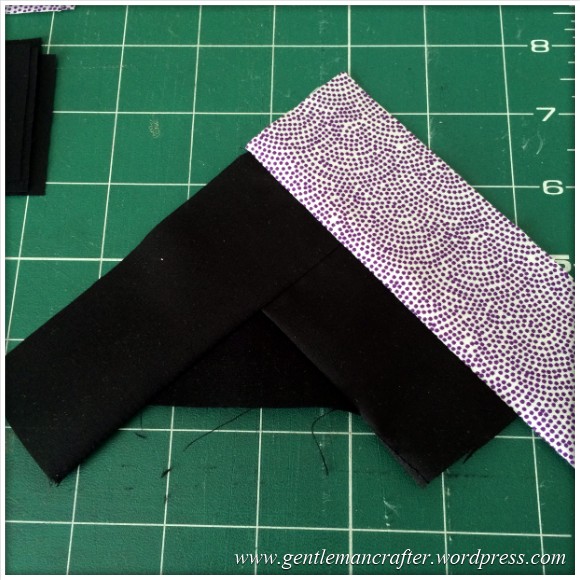 Followed by a pink strip. 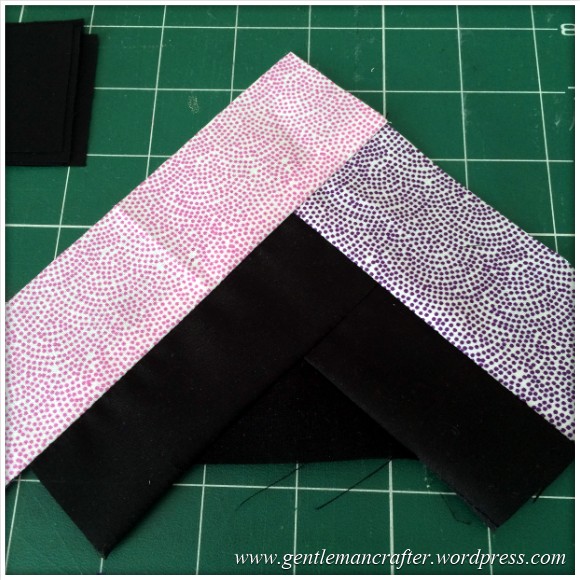 I then continued applying strips in this order. 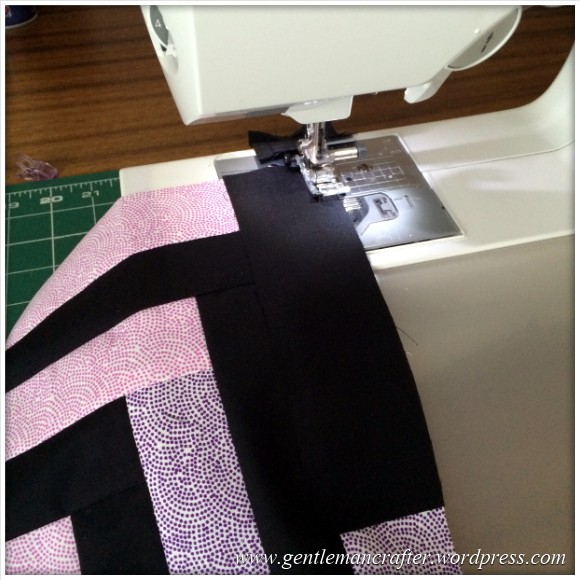 After a while I had a braid strip that was about twenty inches long. 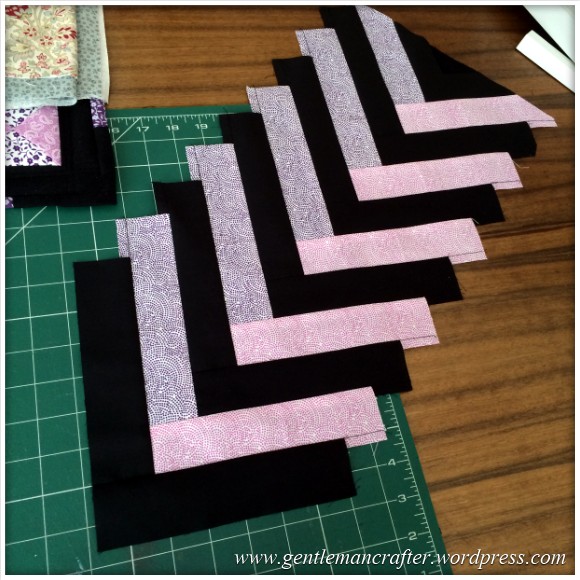 I braced myself for the “peak test”, where you check to see if all of your peaks line up … 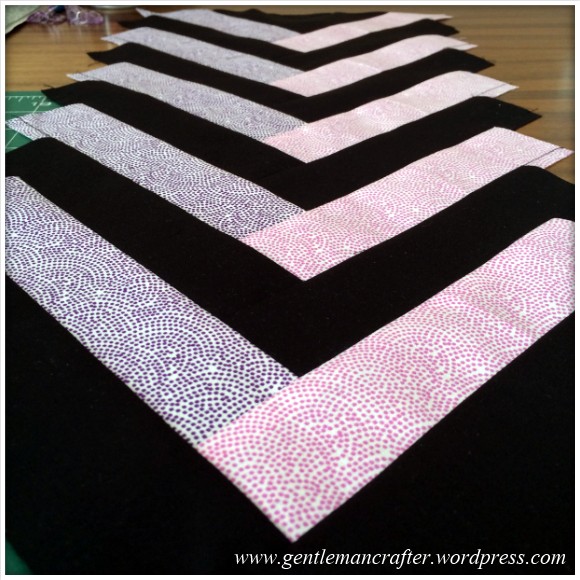 Hmm, looks good, but only one way to REALLY tell … 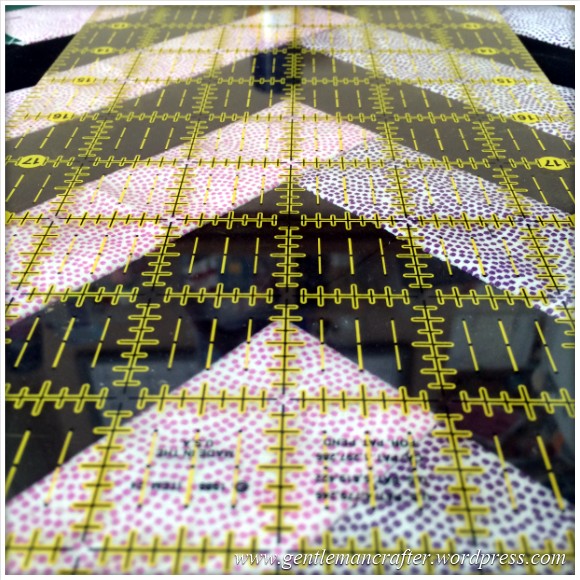 SUCCESS! (which after last week’s debacle was even more sweet).

Anyway, that was one of the braid pieces all stitched together. I just needed to trim the edges and neaten it off.

The piece was about seven inches across so I measured the same distance out from the centre on each side and cut. 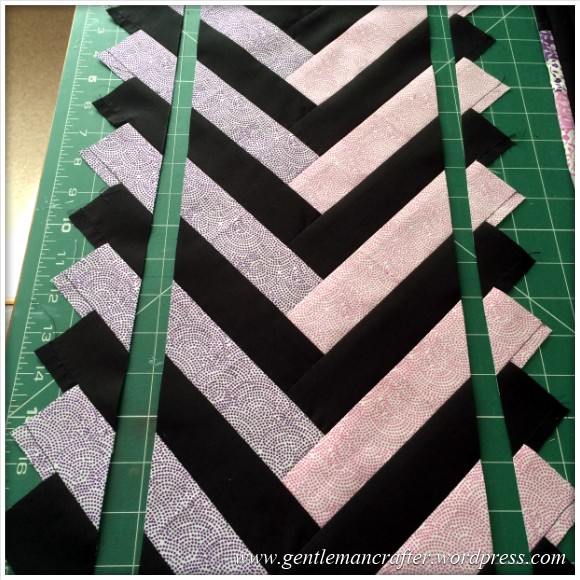 Oddly this results in uneven offcuts, but then it’s the bit that’s left behind that I’m interested in I guess.

Here is how it looked when all trimmed and tidied. 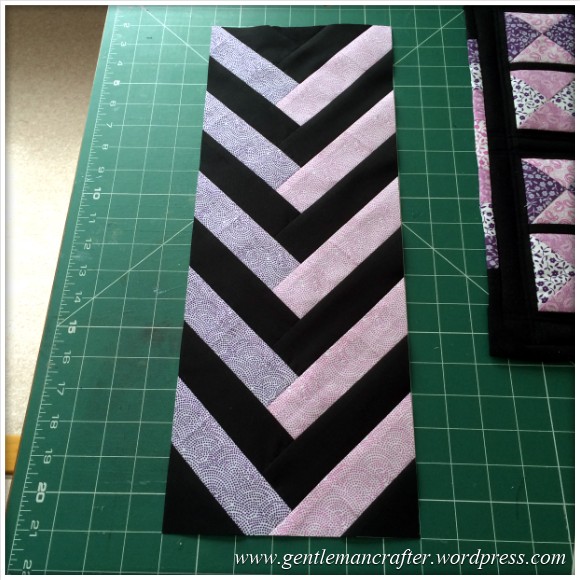 After completing the second braid strip, the same as the first, I checked out of the craft room for some lunch.

It was a lovely sunny day, and I’m trying to watch my weight, so I treated myself to a lovely chicken salad with pomegranate seeds. 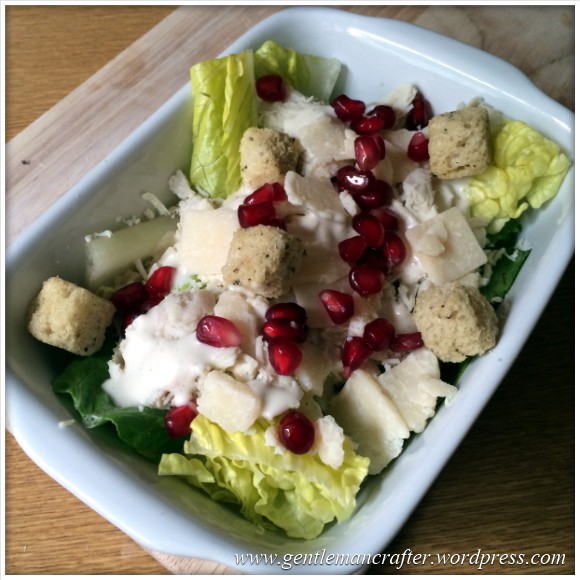 I can tell you that it was delicious!

Anyway, after munching that down I made a cup of tea and headed back into the craft room.

Now, I didn’t have enough of the 2″ x 7″ strips left to make another braid so I looked at ideas for using what was left.

The idea struck me that I could make strips (like I did last week for the edge of the quilt block) and use these as little decorative stripes down the side of the braid strips, separated by a thin black strip.

Idea in hand, I set to sewing up the strips.

I began by pairing up the pink and purple strips and chain piecing these. 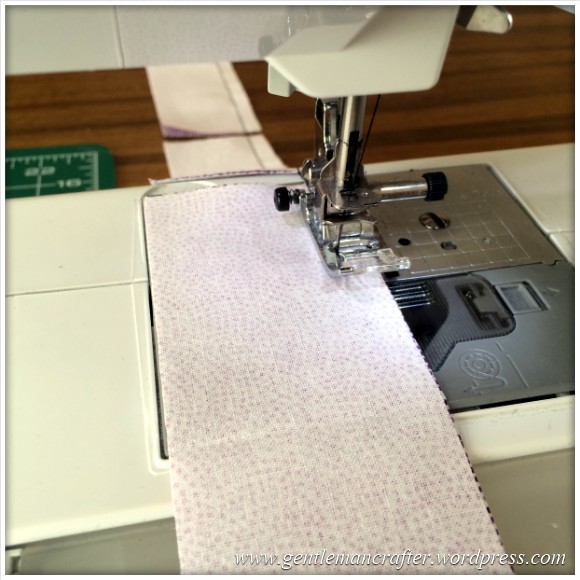 I pressed the seams out from the centre. 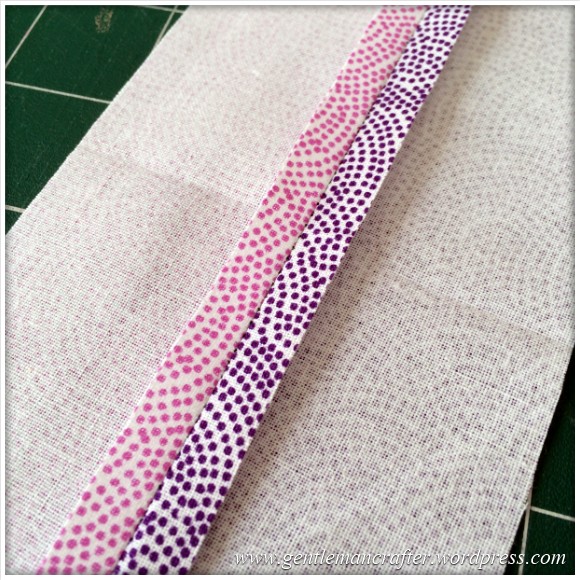 Then I added a black strip to all but one of the pairs. 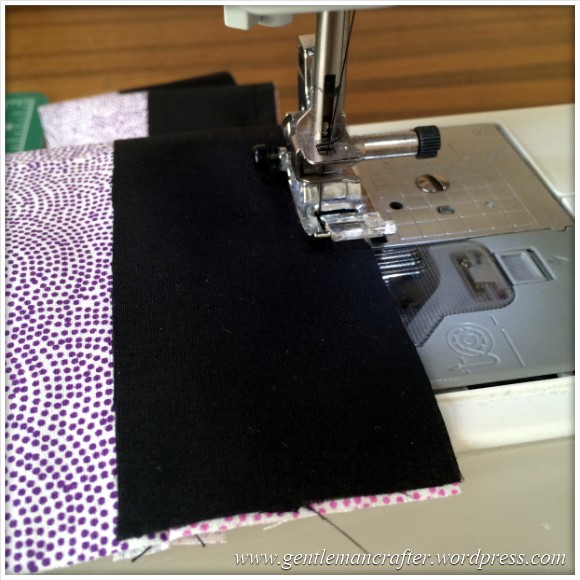 And finally started adding the groups together until I had a long strip, about twenty inches long.

I cropped this into four long strips.

Before I stitched it altogether, I thought that I would lay it out side by side to see if my idea would work. 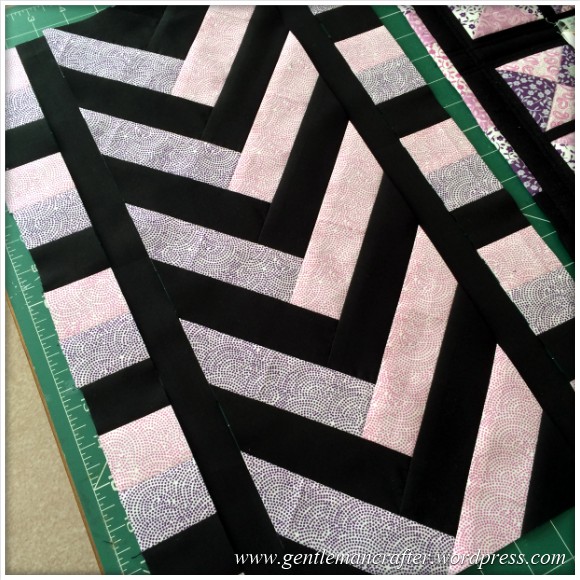 Ok, yup, I think that that works. I’m not fussed that the colours don’t line up, I have the separation of the black fabric to give it it’s own design purpose.

I stitched the pieces together, pressing the seams in-between attaching each piece until I had this… 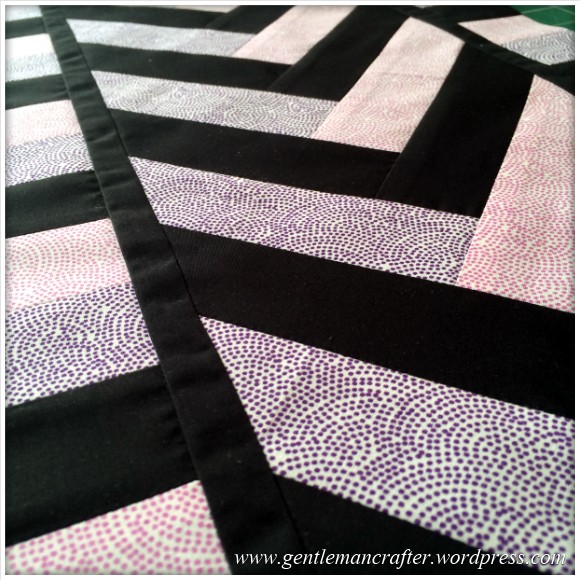 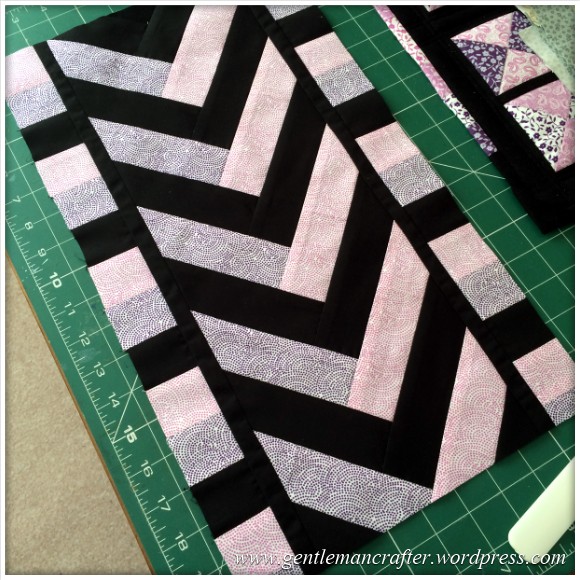 I repeated this for the second braid strip and then sadly it was time for me to break away from the sewing machine but at least I’ve got a head-start on next week … I just need to decide what to make with these two panels now – a handbag? a cushion?

What would you make with two of these panels?

Anyway, thanks for reading. Look forward to sharing the final piece with you next week!

If you have any questions or comments about this post, please feel free to use the comments section below.

See you next time.