For sometime now we have all known how to do the half cut technique with our manual die cutting machines and I have demonstrated one way of scanning in a ready made design and converting for use with the Brother Scan N Cut however I wanted to have a little play to see if this could be achieved with the Brother Scan N Cut Canvas as I hadn’t really seen a way to do it before.

The good news is, that it IS possible.

The even better news is that it appears to have opened up other possibilities – read on to find out more!

First things first, I should show you what I mean by the half cut technique. 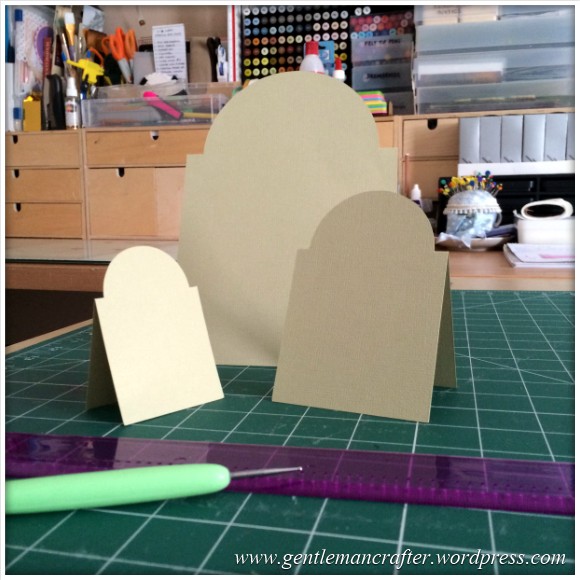 No, I’m haven’t inadvertently started making the set pieces for a new horror film set in a graveyard you cheeky monkey.

I’ll grant you that they were fairly basic examples so here is one that has a little more ooomph. 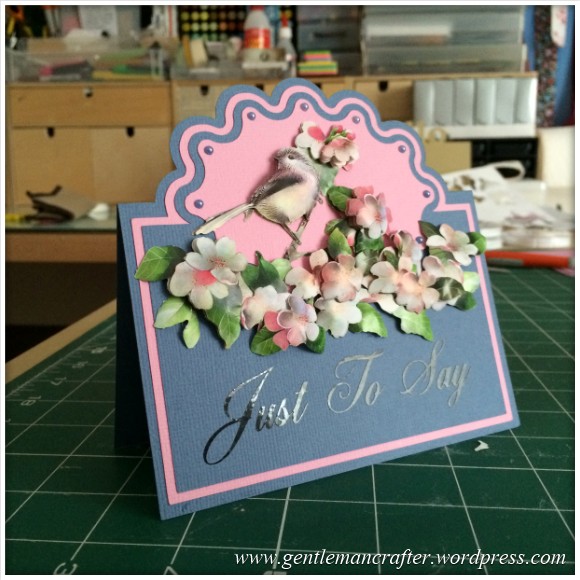 Tweet isn’t it? Erm, I mean sweet. Sorry for the pun.

Anyway, as I mentioned, I did demonstrate one way of doing this on TV earlier in the year (by scanning a design) but I set about seeing if there was a way that I could do this with just the machine and software only.

The beginning is oft a good place to start.

Then I opened the basic shapes and added three squares – all the same size.

Just a quick hint here – if you are planning to resize the square, just drag one on to the virtual mat, resize it and then duplicate that one rather than trying to match the sizes between three different squares.

I then zoomed into the part of the design where the top two squares met and adjusted them so that the two shapes overlapped on one edge only. I made sure that there wasn’t a double thickness line by nudging it across using the arrow keys on my keyboard.

Finally I selected both shapes and used the Align>Middle function from the Edit menu.

I then turned my attention to the lower square and brought it up so that it’s right edge was in line with the join of the two other squares. That zoom function really helps!

This is how my page is looking so far.

Why three squares? The top two squares are going to be my card base. The third square is going to act as a sort of punch.

From my basic shapes section I then brought in a circle, scaled it down a bit and then made sure that it’s centre lined up with the right edge of the bottom square.

Then, after selecting both the circle and the bottom square together I clicked on the Divide button. Don’t know where the Divide button is? It’s one of the buttons above the virtual workmat – just hover your cursor over them and their name pops up – which is helpful when you forget, like me.

Nothing much appeared to happen on screen as you can see.

What had in fact happened though is that the overlapping parts of the circle and square were now individually selectable which meant that I could click on them and delete them and then end up with this.

Now, this is a complete shape and the machine will only know to cut around the whole outline, which is not what I wanted as that would have given me an aperture, not a half cut shape.

So, next I clicked twice on the semi circular shape so that it entered the line editing mode, which looks something like this. 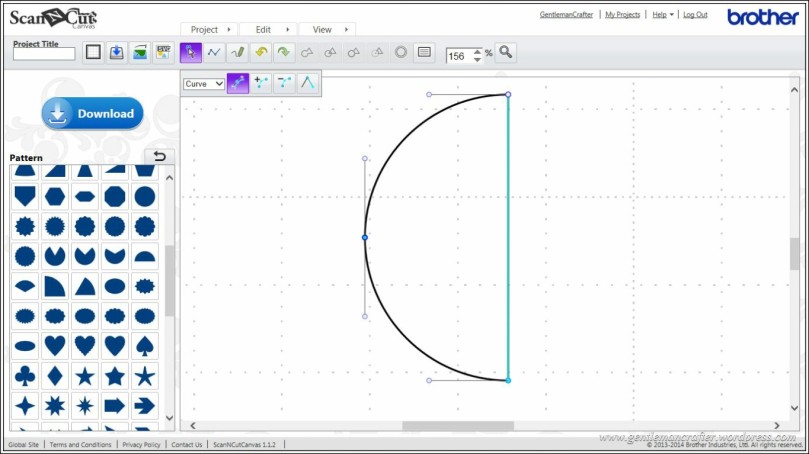 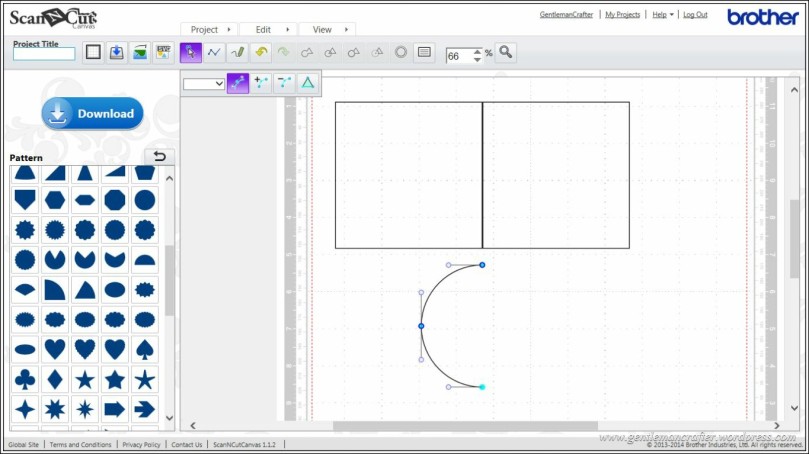 Perfect! Next, I needed to weld the square shapes at the top together to form my card so I selected both squares and clicked on the weld button.

Tip: You shouldn’t have a line running through the rectangle after you have welded. If you get this, click undo and stretch one of the squares a little over the other and then try welding again. 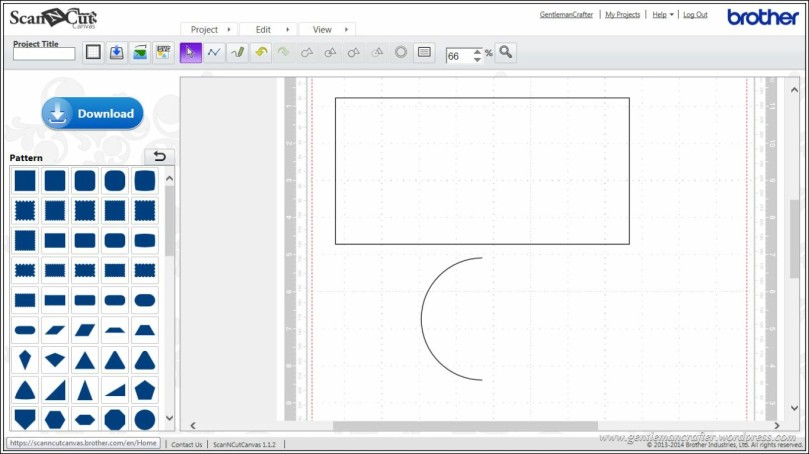 Then, to move the semi circle into place I dragged a selection box over it and then used the up arrow key on my keyboard to slide it up. As I already had it positioned so that it would sit on the fold line I didn’t use the mouse for this operation because I didn’t want to risk putting it out of alignment. 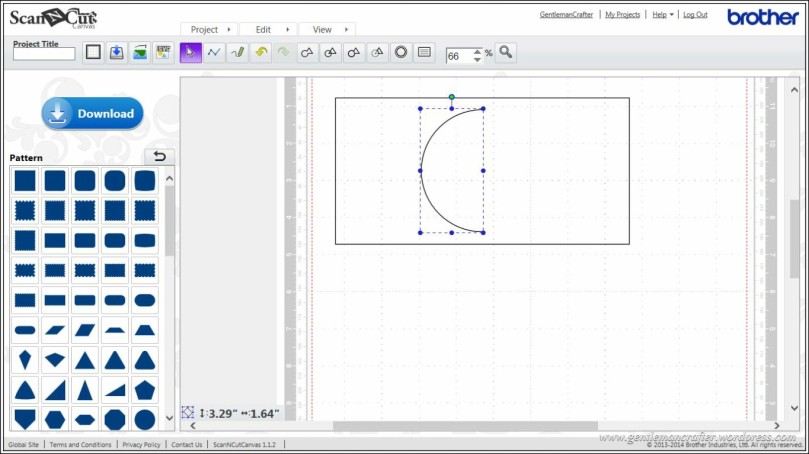 After moving the semi circle over the rectangle I then dragged a selection box around the whole group and used the Align>Middle function from the edit menu to make sure that it was in the middle of what would become the fold.

The final act was to group them together. This had two advantages – it meant that I could move it around screen without risk of knocking anything out of alignment and two, I could resize it :)

By the way, quick tip, if resizing anything in canvas and you don’t want things to stretch out of shape then hold down the shift key on your keyboard as you drag the little resize handles – works a treat!

Ok, so that’s the basic principal – now I did go on to ask myself if this would work with other shapes, designs and text but more on that in a minute. First, I’d better show you the result of this little cut – back to the graveyard – cue spooky music!

Next I tried some of the borders that were accessible from the Brother Scan N Cut Canvas software.

The design is built in much the same way.

However I did discover a couple of things whilst playing with borders.

Firstly, you may need to adapt the design by deleting some of the nodes in the line editing feature.

The zoom tool is your best friend with this!

I could have gone in much further. You select nodes by dragging a selection box over the ones that you want to delete and then click on the icon that shows a line with a – symbol next to it on the pop up line editing menu bar.

Don’t panic, you do have an undo button :)

Here is the finished design using the lacey border.

I did notice that I hadn’t quite edited the lines at either end well but I can always go back in and edit these at any time, which is a nice feeling.

It wasn’t so bad when I cut it out though, so not rushing to get back in there and fiddle with me nodes.

Next I asked myself if it worked with text.

Well, I knew that it could from my previous scanning experiments however this software was slightly different and required some lateral thinking when it came to text.

I first tried text in the way that I had been doing for the other shapes however I hit a snag. In the next image you can see how I have managed to get to the stage where I have “opened” one end of the letter h. 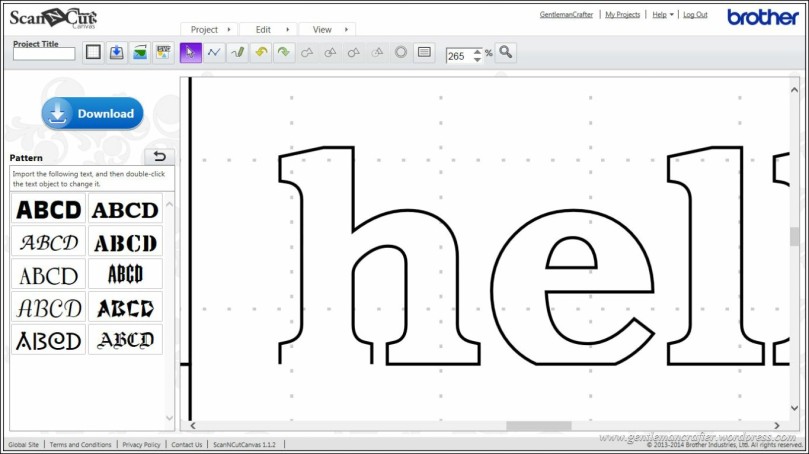 It turns out however that you can only have one open end. So I tried deleting nodes, but this just sent the shapes, well, out of shape.

So I tried a different approach. This time I welded the letters to the large shape first.

This ultimately meant that I could “open” the bottom of the box and then delete the connecting lines so I went ahead and ended up with this. 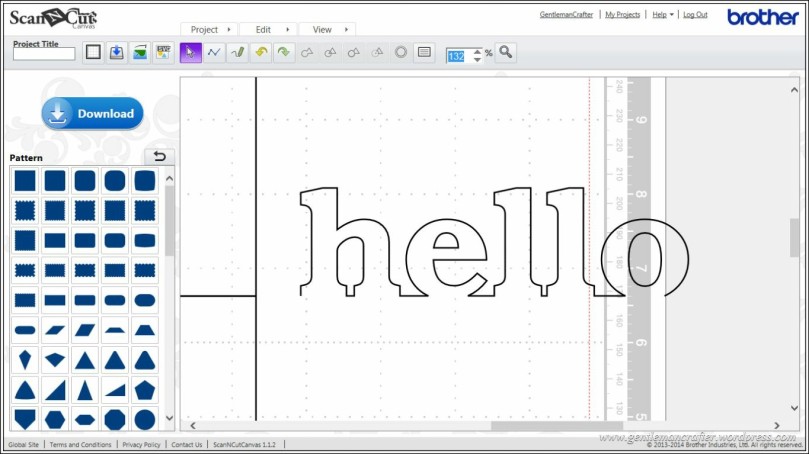 So that was closer to what I wanted however I couldn’t find a way to remove the cut lines inbetween each letter, which, when cut, gave me this.

That kind of was the result that I was after but I worried a bit about the stability of the card as it stood up as there was a lot of “empty space” at the fold line.

It did strike me as odd that I couldn’t separate the shapes but then an idea sprang up to me like a super excited puppy (I would love a puppy!) – I had loaded all of these letters as a group by typing them all at one time, perhaps if I loaded the letters individually they may act differently, so I ran with that idea.

I loaded up the letters individually and welded them as before but this time, each to their own block.

This got me closer to the desired result as I ended up with this.

Letters with a double leg, like the letter h still had the connecting bit in the middle however at least each of the letters were separate.

Anyway, here is what it looked like when it was cut out. 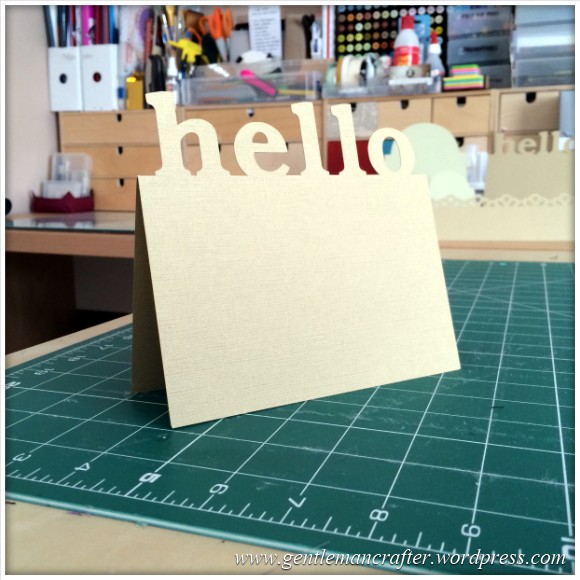 With text, it might just be easier to continue creating it on the PC and then scanning it, but I will see if I can refine this process in the future – if you have any gems of ideas, then please feel free to pop them in the comments section below along with any questions that you may have about this post.

Anyway, with all of that in mind I set about creating a half cut scalloped-oval-topped-card from the basic shapes and then completed it with some peel off words, also made with the Scan N Cut, and then some decoupage that I already had. 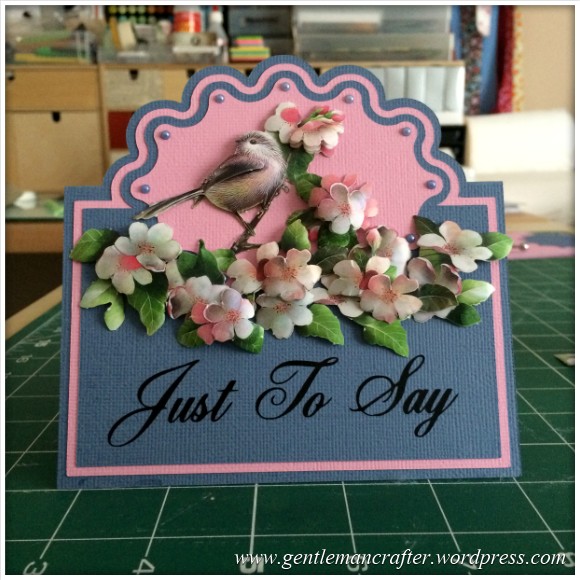 For the extra layers on this card I simply duplicate the topper shape and the card shape and used the offset feature to create layers smaller than the original and then welded successive sizes together. Simples.

Right, so you’ve got an idea of how to do it and what can be achieved why not go grab a coffee and then get cracking at designing some for yourself!

It takes a little while to get used to the way this software works but once you have learnt the technique you can start creating lots of unique designs over and over again – just have fun with it.

I’ll sign off now and leave you to your creativity.

See you next time fellow scanners!